WORTH
Published on September 17, 2019
SHARE
30. Boris Johnson Prime Minister of the United Kingdom

PATH TO POWER: Johnson was born on New York City’s Upper East Side to British parents while his father was studying at Columbia. His lineage, though, goes back to King George II and a paternal great-grandfather who was a liberal Turkish journalist in the early 1900s. Johnson attended Eton and Oxford and started his career as a popular though controversial journalist and columnist covering the European Union. He entered parliament as a Conservative in 2001 and then served as mayor of London from 2008 to 2016, when he became a leader in the Brexit movement.

POWER PLAY: Johnson was a huge booster for the original Brexit referendum. Since the United Kingdom’s “leave” vote, he has been hard-line, willing to risk a no-deal exit if the European Union doesn’t grant the nation favorable terms. Following Theresa May’s resignation, Johnson emerged as the clear front-runner to become prime minister.

PATH TO POWER: Dalio, who grew up in Queens the son of a jazz musician father and homemaker mother, got his first taste of trading stocks with money he earned working as a golf caddy while in high school. After a handful of Wall Street jobs, mostly trading commodities, Dalio founded Bridgewater in 1975 and struggled throughout the 1980s. But four decades later, Bridgewater is the world’s largest hedge fund firm, with about $150 billion in assets, and Dalio, now worth $18.4 billion, is one of the world’s wealthiest people.

POWER PLAY: In recent years Dalio, 70, has become something of a philosopher and has been speaking out about the problems of American capitalism, saying it needs urgent reform. Arguing that “the American dream is in jeopardy,” he believes taxes on the wealthy should be raised because the increasing disparities in income, wealth and opportunities among Americans “pose existential threats to the United States.” Dalio has also called out the underfunding of public schools, which he describes as “economically stupid.” In April, shortly after publishing these thoughts on LinkedIn, Dalio and his wife gave $100 million to strengthen the public education system in Connecticut, where they live.

Related Leading Voices: A Conversation with Illana Raia on Mentorship

PATH TO POWER: Jin was swept up in the Chinese Cultural Revolution and was forced to trade college for rice paddies and hard labor as part of the Red Guard. When universities reopened in 1978, Jin studied at Beijing Foreign Studies University, earning a master’s in English in 1980. He studied at Boston University on a yearlong fellowship in 1987 and then went to work at the World Bank in Washington, D.C. Subsequently, he returned to China to run the Asian Investment Bank and chair the China Investment Corporation, before taking charge of the newly created $250 billion Asian Infrastructure Investment Bank in 2014.

POWER PLAY: The AIIB is key to China’s ambitious Belt and Road Initiative to build a modern-day Silk Road, and it is meant to directly counter institutions such as the World Bank and the Asian Development Bank. Although it only began lending in 2016, Jin has had to fend off criticism that the AIIB is deliberately seeking to create debt traps for developing nations such as Sri Lanka, Malaysia and Venezuela. He denied that the Chinese were intentionally overlending, but Jin told the Financial Times in January that the AIIB would begin to “rebalance” its lending strategy.

PATH TO POWER: Simons is a graduate of Cornell and Georgetown University Law Center. He served in the early years of the George W. Bush administration, heading the FTC’s Bureau of Competition, and was co-chair of law firm Paul, Weiss’ antitrust group. Known as an anti-monopolist, Simons was nominated by the White House to head the FTC in October 2017 and took office in May 2018.

POWER PLAY: This spring, it was announced that the FTC is negotiating a settlement with Facebook over the company’s failure to protect users’ private data. Part of that settlement would include the creation of new positions at the company intended to increase privacy. But further steps could be in the offing: The FTC and DOJ have divided up oversight of Facebook, Google, Apple and Amazon as the agencies mull antitrust enforcement. Facebook remains the FTC’s priority, alongside Amazon. The decision marks a watershed moment in those companies’ relationship with Washington, and the outcome of the government’s actions could have a profound impact on the future of America’s biggest tech firms.

PATH TO POWER: Draghi, the son of a pharmacist and a banker, grew up in Rome. He earned a PhD in economics at MIT and began his career as an academic in Florence before joining the World Bank and becoming director general of the Italian Treasury. Draghi went through the revolving door, guiding Goldman Sachs’ European strategy during the early years of the financial crisis, then serving as governor of the Bank of Italy before becoming president of the European Central Bank in 2011.

POWER PLAY: Draghi’s term is drawing to a close in October, and in early July European leaders agreed to nominate International Monetary Fund director Christine Lagarde (number 62) as the next president. Still, Draghi will be around to guide the ECB through the final stretch of Brexit negotiations. Although Draghi is credited with saving the euro during the financial crisis, his successor will face rising populism, the aftermath of Brexit and a restive American president. 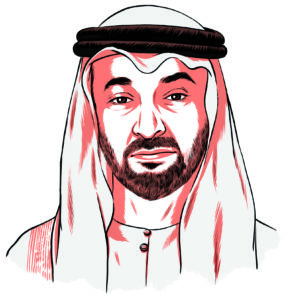 PATH TO POWER: Often referred to as MBZ, bin Zayed calls the shots in the UAE and has emerged as arguably the most important political and financial actor in the Middle East. MBZ trained as a paratrooper and tactical helicopter pilot at the prestigious Royal Military Academy Sandhurst in the United Kingdom and then went through officer training in the UAE. He emerged on the world stage at age 29 when he negotiated a massive arms deal with the United States in 1991. He ascended to rule the UAE in 2004 after the death of his father.

POWER PLAY: MBZ’s power isn’t limited to military might and statecraft (American military advisors refer to the UAE as “Little Sparta,” according to the New York Times); he also sits atop a $1.3 trillion sovereign wealth fund. In Abu Dhabi, he’s pushing for the creation of an entirely new financial district and has attracted outposts of New York University and the Guggenheim Museum. Recently, the Abu Dhabi Investment Authority made a $495 million investment in renewable energy in India, a hedge for a nation whose wealth is derived from oil.

PATH TO POWER: McConnell holds degrees from the University of Louisville and the University of Kentucky College of Law. He was elected to the Senate in 1984, the first Republican to represent Kentucky in that body since 1968 and a harbinger of the South’s shift to the GOP. He was elected Senate minority leader in 2006 and became majority leader in 2015.

POWER PLAY: During the Trump era, there has been a clear understanding between the White House and the Senate: Mitch McConnell is happy to sit back and stay quiet as Donald Trump fights his unorthodox fights, while behind the scenes, McConnell will continue to focus on conservative priorities. In perhaps no area has he been more successful than in reshaping the federal judiciary. Trump has appointed, and McConnell’s Senate has approved, more than 120 judges since the president assumed office, including most importantly two youngish Supreme Court justices—one filling Antonin Scalia’s seat, which McConnell had refused to fill with Obama’s nominee, Merrick Garland, arguing that it was an election year. If a Supreme Court seat opens up in 2020, another election year, McConnell was recently asked, what would the Senate do? “I would fill it,” he replied, trying, and failing, to suppress a smile.

PATH TO POWER: A graduate of Georgetown and the University of North Carolina at Chapel Hill’s School of Law, Mulvaney was elected to the South Carolina legislature in 2006 and to the U.S. House in 2010, where he helped found the right-wing House Freedom Caucus. He endorsed libertarian Rand Paul in the 2016 presidential election but backed Trump early and was chosen as the president’s nominee to head the Office of Management and Budget in December 2016.

POWER PLAY: Mulvaney has worn several hats since joining the Trump administration, serving as OMB director while also helming (and gutting) the Consumer Financial Protection Bureau. At the end of 2018, he got yet another job: With the ouster of chief of staff John Kelly, Trump named Mulvaney acting chief of staff. In the Trump administration, an “acting” title is as good as permanent—Trump likes having people in acting roles, feeling it makes his appointees more beholden to him. For better or worse, Mulvaney’s tenure in the role has been defined by fewer of the sort of intra-White House public fights common under previous chiefs of staff; Ivanka and Jared can do what they want, and Trump can be Trump. What’s really important to Mulvaney: snipping away at domestic spending every chance he gets.

22. Nancy Pelosi Speaker of the U.S. House of Representatives, D-California

PATH TO POWER: Pelosi was raised in Baltimore and got involved in politics at a young age, interning in Democratic senator Daniel Brewster’s office. In 1987 she was elected to the U.S. House, and in 2007 she became Speaker, moving to become minority leader after Republicans swept the midterms in 2010. She was a key opponent of the Iraq War and one of the primary forces behind the passage of Obamacare.

POWER PLAY: At age 79, Pelosi is having her moment. After the Democrats won back the House in the 2018 midterms, some Democrats worried about Pelosi; the former speaker had become a GOP bogeyman, cast alongside George Soros as the epitome of a left-wing coastal elite. But after winning the Speaker election in early 2019, she has shown herself to be a deft and calculating politician, holding together a caucus that is, ideologically, spread far and wide, with an impatient progressive flank exemplified by Alexandria Ocasio-Cortez grating against Democrats from purple districts who worry about holding their seats in 2020. Even Trump seems to have a grudging respect for her, holding off on bestowing her with a nickname, unlike her counterpart in the Senate, “Cryin’ Chuck” Schumer. And with good reason: She is the one person between the president and an impeachment inquiry.

PATH TO POWER: At 88 years old, Murdoch remains a dominant figure in world media and politics. The son of an Australian newsman and newspaper executive, Murdoch began buying up newspapers Down Under over six decades ago, eventually creating a global empire encompassing major companies such as the New York Post, the Wall Street Journal, HarperCollins and the Fox News Channel.

POWER PLAY: Through his newspapers, TV channels and publishing companies Murdoch has slowly inundated the English-speaking world with right-wing commentary. And while some outlets such as the Wall Street Journal have remained journalistically objective—holding President Trump to account, for instance—Fox News has not only supported conservative causes, its pundits, particularly Sean Hannity, have become both mouthpieces and Svengalis for the White House and its approach to economic issues. While the current populist wave cannot be attributed solely to the influence of News Corp, its sustained strength in the United States and UK certainly can be.