WORTH
Published on September 17, 2019
SHARE
40. Stephen Schwarzman Chairman and CEO, the Blackstone Group

PATH TO POWER: After attending Yale and serving in the Army Reserve, Schwarzman earned an MBA from Harvard. Then it was off to Wall Street where Schwarzman became a partner at Lehman Brothers at just 31 years old. He founded Blackstone with former boss Peter Peterson in 1985. The two grew Blackstone into one of the world’s largest private equity firms with $472 billion in AUM and took it public in 2007.

POWER PLAY: Blackstone followed in the footsteps of competitor KKR and converted to a corporation in 2019, taking advantage of U.S. tax cuts (Schwarzman has been generally supportive of the Trump administration). And in June the firm announced it had raised $12 billion from Saudi Arabia to anchor an infrastructure fund, which is expected to eventually reach $40 billion. Schwarzman also has a philanthropic streak and recently committed to a £150 million gift to Oxford University.

PATH TO POWER: Griffin founded Citadel in Chicago in 1990, a year after he graduated from Harvard, where he famously started trading convertible bonds from his dorm room. Its high leverage led Citadel to lose half of its assets during the financial crisis of 2008, but the ensuing era of Fed-induced low interest rates allowed the hedge fund to bounce back. It is now also one of the globe’s largest hedge fund empires, with $30 billion under management.

POWER PLAY: Griffin, 50, made news this year for the $238 million he paid for a Manhattan skyscraper penthouse overlooking Central Park, the highest price ever paid for a U.S. home. Griffin, a Republican donor who is now worth $11.6 billion, declared that “soaking the rich doesn’t work” in an interview at the annual Milken Institute Global Conference in April in which he addressed political solutions to income inequality. Two years ago, Griffin gave $125 million to the University of Chicago, which is renaming its economics department after him.

PATH TO POWER: Raised in a large Irish Catholic family in Marietta, Ohio, Moynihan studied history at Brown, where he was an avid rugby player, and earned his JD at Notre Dame. Returning to Providence, R.I., Moynihan worked for the corporate law firm Edwards & Angell, and then became general counsel at FleetBoston in 1993. Moynihan stayed with the company when Bank of America acquired Fleet, and then was tapped as CEO of Merrill Lynch when BofA absorbed that firm in 2008. In 2010, Moynihan became Bank of America’s CEO, and was named chairman in 2014.

POWER PLAY: The somewhat stoic Moynihan has led BofA with a steady hand. Since weathering massive downsizing and paying $17 billion in fines during the financial crisis, Moynihan has presided over strong results in a volatile market, and his performance in 2018 boosted his compensation 15 percent, to $26.5 million. The bank’s first-quarter profit in 2019 rose 6 percent to a record $7.3 billion. Moynihan has recently been warning investors of the potential dangers lurking in the leveraged loan market if the economy sours, but says economic activity and confidence remain strong. He’s also been championing the importance of immigration to the U.S. economy and of environmentally sound investing.

PATH TO POWER: The New York native launched his first hedge fund, Gotham Partners, shortly after receiving his MBA from Harvard in 1992. Even though Gotham was forced to shut down in 2001 after an ill-fated investment in a golf course company, Ackman came back to found Pershing Square Capital Management in 2004. He soon became famous for a short on municipal bond insurer MBIA, making $1 billion when its stock collapsed during the financial crisis. In 2014, he launched a publicly traded hedge fund—one of the biggest of its kind.

POWER PLAY: Ackman’s coup is simply staying in the game. The 53-year-old’s fortunes took a turn for the worse in recent years due to a bad bet on Valeant, the controversial pharma company—on which he eventually lost $4 billion—and an unprofitable short of Herbalife, which he still believes is a pyramid scheme. While such heavy losses led many to predict Pershing Square would go under, Ackman has bested his critics—in no small part due to the permanent capital of his publicly traded fund, now his largest vehicle. This year he has come roaring back, outdoing his peers and the market with a gain of 40 percent through mid-June.

PATH TO POWER: A Harvard graduate, Buckley began his career in 1991 as an assistant to John Bogle, founder of the Vanguard Group. Buckley built a career at Vanguard, now the second-largest investment management company, behind BlackRock, in terms of AUM. He served as the chief information officer and chief investment officer before becoming president and CEO of the $5.3 trillion company in 2018.

POWER PLAY: In January, Buckley became chairman of Vanguard after Bill McNabb stepped down. This year, Vanguard’s main competitor, BlackRock, has experienced a significant decline in net inflow, positioning Vanguard, the fastest-growing asset manager globally, to compete for the top spot. Vanguard is also flexing its muscle with portfolio companies: The firm owns more than 7 percent of Boeing, for instance, and at Buckley’s direction moved in June to exert pressure on management over safety failures in the 737 Max jet.

PATH TO POWER: The son of a publishing executive and an audiologist, Solomon grew up in Scarsdale, N.Y. He studied political science at Hamilton College and played rugby. Goldman Sachs rejected him the first time he applied, and he started his career at Irving Trust, Drexel Burnham and Bear Stearns. He finally joined Goldman as a partner in 1999. He rose through the ranks, serving as president, and took over as CEO in 2018.

POWER PLAY: Solomon’s tenure as CEO hasn’t been a cakewalk. Solomon started 2019 by apologizing to the Malaysian people for former partner Tim Leissner’s involvement in the 1MDB scandal. That hasn’t stopped Malaysian authorities from seeking a $7.5 billion penalty from Goldman. And in April the bank announced it was delaying the release of its new strategic plan until 2020, following a 21 percent drop in earnings in the first quarter of 2019.

PATH TO POWER: Tusk, a political centrist, became European Council president in 2014. He previously served as Poland’s prime minister. Tusk’s tenure as leader of the European Union has seen the body undergo near-constant challenges, many stemming from the rising tide of right-wing populism. Tusk sees himself as the man holding it all together. “We must stand up very clearly for our dignity, the dignity of a united Europe—regardless of whether we are talking to Russia, China, the U.S. or Turkey,” he wrote in 2017, warning also of “the rise in anti-EU, nationalist, increasingly xenophobic sentiment in the EU itself.”

POWER PLAY: One of the biggest outcomes of that global trend is Brexit, a massive headache for both Britain and the EU. Tusk warned dryly this year that he’ll be open to conversation with Theresa May’s ultimate successor, but that no one should get their hopes up that he wouldn’t be holding firm. “Maybe the process of Brexit will be even more exciting than before because of some personnel decisions in London, but nothing has changed when it comes to our position,” he said. But Tusk may not be around to see it; he steps down in December, apparently to be replaced by Belgian prime minister Charles Michel. 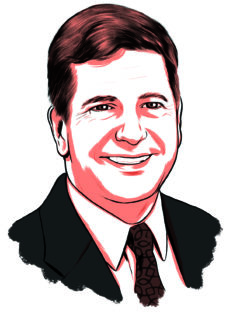 PATH TO POWER: Clayton grew up in Pennsylvania and graduated from Cambridge and the University of Pennsylvania Law School. In 1992 he joined Sullivan & Cromwell in New York and became a partner in 2005. He has represented and advised
numerous Wall Street firms, most notably Goldman Sachs on their dealings with regulators, including the SEC. On Gary Cohn’s recommendation, he was nominated to head the SEC in January 2017.

POWER PLAY: Denounced by some Democrats as a “Wall Street attorney,” Clayton has proven to be a bit less predictable. Unlike other Trump administration appointees bent on, in former White House advisor Steve Bannon’s words, “deconstructing the administrative state,” Clayton has only cautiously pursued the administration’s deregulatory agenda and has often sided with Democrats on decisive votes. A 2018 Reuters analysis found that on 75 votes split along party lines, Clayton sided with Democrats on 37 percent of them. Now it’s the Republicans grumbling that Clayton is not moving fast enough to unfetter American businesses.

PATH TO POWER: A long-time conservative activist, Moore has been affiliated with conservative think tanks, such as the Heritage Foundation and the Cato Institute, since the early 1980s and cofounded the influential Club for Growth in 1999. In 2017 he worked with his friend, Larry Kudlow, director of the National Economic Council, to draft the Republican tax cut that passed at the end of 2017.

POWER PLAY: It was a quick, wild ride for Moore. On March 22, President Trump announced he was planning to nominate Moore, an economic pundit of rather modest repute, a frequent cable news commentator and an informal White House advisor, for a seat on the Fed. By May 2, the president had changed his mind. The nomination was scuttled in part by details of Moore’s messy divorce, but more so by his past writings, including columns in which he argued that rising wages for women “could be disruptive to family stability” and that coed soccer games are “doing irreparable harm to the psyche of America’s little boys.” Republican senators complained to the White House, and the potential nomination vanished. Yet Moore remains a cable news fixture and has the ear of many in the administration on some the nation’s most critical economic issues.

PATH TO POWER: The legendary value investor, born in Omaha, Neb., in 1930, graduated from the University of Nebraska–Lincoln at 19 and went on to receive his master’s from Columbia. He started investing in textile manufacturer Berkshire Hathaway in 1962 and eventually took over that company, expanding its investments into insurance and other industries and growing it into the multinational conglomerate it is today. Buffett, with a net worth of over $80 billion, is one of the richest people in the world—and one of the most charitable.

POWER PLAY: Berkshire Hathaway has had a less than stellar year: A significant investment in Kraft Heinz, which took a $15 billion write-down this year and revealed it’s being investigated by the SEC for its accounting procedures, reflected badly on the company. But at the conglomerate’s annual meeting in Omaha in May, Buffett was his usual sage self, reflecting on the company’s recent $860 million investment in Amazon by saying he should’ve done it sooner and criticizing private equity firms. The 89-year-old also had vice chairmen and board members Greg Abel and Ajit Jain, seen as likely successors to Buffett and his right-hand man Charlie Munger, lead a town hall session at the meeting. On the philanthropy side, Buffett’s (and Bill and Melinda Gates’) Giving Pledge received a boost of good PR when Jeff Bezos’ ex-wife MacKenzie revealed that she signed the pledge and will donate more than half of her $36 billion divorce settlement in her lifetime.