PATH TO POWER: Malpass served in the Reagan and George H.W. Bush administrations and became chief economist at Bear Stearns in 1993. In 2007, while in the role, he wrote an op-ed urging that no one “panic about the credit market”; the firm subsequently collapsed. In 2016 he advised Donald Trump’s presidential campaign, and in 2019 Trump picked him to head the World Bank over the wails of critics.

POWER PLAY: Malpass assumed the job of World Bank president on April 9, 2019. Put forward by the Trump administration—the U.S. traditionally chooses the head of the World Bank—many saw Malpass as a controversial pick; he has been a critic of the international financial institutions such as the International Monetary Fund and, yes, the World Bank, arguing that they have too much influence.

PATH TO POWER: Taylor studied at Harvard and earned a JD and MBA from Stanford, and she’s made a career as a leading philanthropist and finance executive. While her husband, billionaire Tom Steyer, has focused most of his recent efforts on a campaign to impeach President Trump, Taylor manages a range of nonprofits, such as an experimental sustainable cattle ranch, and serves as CEO of Beneficial State Bank.

POWER PLAY: Taylor sees climate change, income inequality and financial regulation as intertwined issues. She resigned from the Harvard Board of Overseers in 2018 and publicly shamed the school for the opacity of its endowment and continued investment in sectors including fossil fuels and water. Since then, as the CEO of Beneficial State Bank, which aims to tackle income inequality by reinvesting in local communities, she’s lobbed bombs at everyone from weak regulators to BlackRock CEO Larry Fink for failing to take more action on everything from climate change to income inequality. 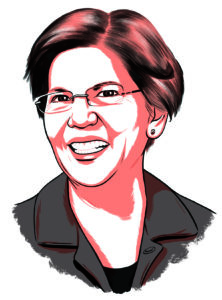 PATH TO POWER: Warren, a former Harvard Law professor and one of the forces driving the Democratic Party’s move left, was a Republican until her 40s. A graduate of Rutgers Law School, she became an increasingly influential law professor, known for her work on bankruptcy. In 2008 then-Senate majority leader Harry Reid appointed her to chair the Congressional Oversight Panel monitoring the implementation of TARP, the bank recovery program. She advocated for the creation of a Consumer Financial Protection Bureau, an idea the Obama administration later adopted—and the Trump administration later gutted—and in 2012 won a Senate seat.

POWER PLAY: Unlike her Senate colleague, socialist Bernie Sanders, Warren embraces capitalism. Capitalism has been a “force for good,” she explains, but it needs rules. And as she runs for president, she has some—many—in mind. Her policy proposals are no less ambitious than Sanders’, but they are far more detailed. So far, it’s working: Warren’s specificity (“I have a plan for that”) has elevated her in the polls.

PATH TO POWER: Tech investor Son graduated from the University of California in 1980. While still in school, he invented a digital translator, which he sold to Sharp for $1.7 million. He created SoftBank in 1981, and by the 1990s he had major stakes in companies such as Yahoo and Alibaba. In 2018, SoftBank had $82 billion in revenue. With an estimated fortune of $22.7 billion, Forbes ranks Son as the second-richest man in Japan.

POWER PLAY: SoftBank’s $100 billion Vision Fund is getting more and more attention. The fund makes massive investments in the most successful tech startups, including Uber, WeWork and Flipkart. It counts among its investors Apple, Qualcomm, Foxconn, the family office of billionaire Larry Ellison and Saudi Arabia’s sovereign fund. And the 0.7 percent to 1.3 percent range of fees that the fund charges investors assures that Son himself will have a very healthy income in the years ahead, even without major exits.

PATH TO POWER: Born into a prominent political family in the Ivory Coast, Thiam trained as an engineer before getting his MBA from INSEAD, in France. He built his career at McKinsey and Aviva before joining Prudential, where he rose to become group chief executive. He became CEO of Credit Suisse in 2015.

POWER PLAY: A three-year restructuring plan that Thiam championed and led at Credit Suisse wrapped up at the end of 2018, pivoting the bank from its two-decade focus on Wall Street investment banking to a new objective of lending to the ultra high net worth. But Thiam’s remake of the bank wasn’t without casualties; in July well-regarded private banker Iqbal Khan, CEO of the bank’s international wealth management division, abruptly quit the company “to pursue other opportunities.” Khan, perceived to have excelled in his job, was reportedly looking to take over from Thiam, who was reportedly not eager to be replaced. Khan lost the battle—but may now be snapped up by Credit Suisse rivals UBS or Julius Baer.

PATH TO POWER: A descendent of Peter Stuyvesant—the last Dutch governor of New York—44-year-old Coleman is as close to an American aristocrat as they come. Raised in the tony Long Island hamlet of Glen Head, N.Y., he started as a tech analyst at Julian Robertson’s Tiger Management, which he joined after graduating from Williams College. After Robertson shut his firm in 2000, he staked Coleman with $25 million to start Tiger Global, making the young hedge fund manager a so-called Tiger Cub.

POWER PLAY: Tiger Global, whose venture capital arm is now bigger than its original hedge fund (they have a combined $28 billion in assets), has become one of the most prominent and successful investors in tech. Coleman, who is worth about $3 billion, is widely considered a hedge fund VC pioneer for investing early in such big hits as Facebook, LinkedIn and Spotify. This year Tiger has the highest number of unicorn investments in its portfolio—42—more than even China’s Tencent and Japan’s SoftBank. Tiger’s investments include Airbnb, Palantir and Uber, which it sold before the ride-sharing service’s debut earlier this year.

PATH TO POWER: The Spanish banker, fourth in her family to run Santander Group, went to school in the U.S.—Bryn Mawr for undergrad and Harvard Business School for her MBA—before spending eight years at J.P. Morgan. She moved back to Spain in 1988 and held various roles at Santander, including executive chair of Banesto and CEO of Santander UK, before taking over as executive chairman of Santander Group following her father’s death in 2014.

POWER PLAY: Despite Santander’s overall strong performance in the Americas, Brexit and Argentina meant the retail banking empire saw a 10 percent drop in profits in the first quarter of 2019. Botín is also trying to move the bank past the drama surrounding Andrea Orcel, the Italian banker she recruited from UBS to take over as Santander’s CEO. Orcel quit his position at UBS last fall and was taking a gardening leave before starting at Santander, but the two banks couldn’t come to an agreement about who would pay the estimated €50 million in deferred compensation he was owed by UBS; and in January, Botín made the decision to rescind Orcel’s offer. The Financial Times reported in January Orcel was planning to take legal action over the matter, and in May quoted him as saying he’s “not one to let things go.” Still, Botín remains one of the most powerful women in banking and is increasingly using her position as such to call for change in the industry.

PATH TO POWER: After serving as mayor of Burlington, Vt., Sanders won election to the U.S. House in 1990 as an independent and the Senate in 2006. In 2016, Sanders ran in the Democratic presidential primary as a long-shot reform candidate, hoping to push Hillary Clinton to the left. That race met with far greater success than even he expected, inspiring a passionate following among many young people and a new generation of progressive Democrats such as Alexandria Ocasio-Cortez.

POWER PLAY: Sanders entered the 2020 presidential race as a frontrunner. He spent much of the early campaign second only to Joe Biden in the polls, with a flock of younger and more diverse candidates lagging behind the two white male septuagenarians. Still, Sanders’ moment may have passed; his full-throated attacks on Wall Street and “big pharma,” etc., now feel almost nostalgic. Meanwhile, his mantle seems to have been picked up by younger candidates such as Elizabeth Warren, who matches Sanders for passion but exceeds him in the specificity of her proposals. Sanders will probably never be president, but he has had an enormous impact on American politics, broadening the conversation to include issues of class, economic justice and capitalism’s failings. Who spoke of socialism in American life until Bernie Sanders ran for president?

PATH TO POWER: Kudlow graduated from the University of Rochester and studied at, but never earned a degree from, Princeton University’s Woodrow Wilson School. He entered politics in the 1960s as a left-winger, was an activist for Students for a Democratic Society and was involved in Democratic politics in the early 1970s alongside Bill Clinton. In subsequent decades, he moved right, serving as an advisor to the Reagan administration. In the late 1980s, Kudlow launched a high-profile career on Wall Street and as a media commentator. He joined the Trump administration in April 2018 following Gary Cohn’s departure as director of the National Economic Council.

POWER PLAY: Trump saw in Kudlow a telegenic presence with ideological flexibility, very different from his predecessor Gary Cohn, who was known to disagree with the president on numerous issues and was less likely to compromise his reputation to gain favor with Trump. Kudlow, once an outspoken free trader, has toed the protectionism line as the White House has ramped up its trade war against China and threatened to throw up trade barriers with other allies. And Kudlow remains Trump’s go-to guy when the president needs to send someone on cable news to defend economic policy; Kudlow recently went on PBS, for example, to make the argument that the administration’s tax cuts had virtually paid for themselves through economic growth, a case not supported by data.

PATH TO POWER: Corbat, a native of Bristol, Conn., has served as Citigroup’s CEO since 2012. The former Harvard football player started out at Salomon Brothers in the fixed-income sales department in 1983. Citi acquired Salomon Brothers in 1998, and Corbat has been with the company ever since. He has served as CEO of Citigroup Global Wealth Management, as well as CEO of Citi Holdings and Europe, Middle East and Africa at Citigroup.

POWER PLAY: Citi hasn’t had the easiest time since the financial crisis, reporting a $6.8 billion net loss in 2017. But Corbat is focusing on growth, and there is progress: The company earned $18 billion in net income in 2018. Even so, the bank was forced to cut payroll by $300 million. And in June Citi announced it was restructuring its rates and currencies businesses in order to, in part, improve profitability. This came just after Swiss regulators fined Citi $29 million for manipulating foreign exchange rates between 2008 and 2013 with other banks such as JPMorgan  and Barclays. Citi incurred the highest fine of all the banks involved.