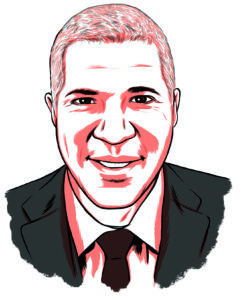 PATH TO POWER: Smith grew up in Colorado and won a prestigious Bell Labs college internship while he was still in high school. He then studied at Cornell and worked for Goodyear and Kraft before earning an MBA at Columbia. Smith joined Goldman Sachs in 1994, launching the firm’s tech investing practice, and then founded Vista Equity Partners in 2000, which he built into one of the most successful tech-focused firms in the country: Vista has approximately $46 billion in committed capital.

POWER PLAY: In May, Smith—considered to be the wealthiest black man in America—delivered the commencement speech at Morehouse College, a leading historically black college. Midway through the speech, he informed the 400 graduates that he would pay off their college loans. The gesture, which caused understandable euphoria on campus, is a powerful move in an era of ballooning student debt and economic challenges for historically black colleges and universities.

PATH TO POWER: Hamers has been with ING for his entire career, starting as a relationship manager in structured finance before moving on to stints as the bank’s general manager in Romania, CEO of ING Netherlands, CEO of ING Belgium and Luxembourg, and finally CEO and chairman of ING Group in 2013. The Dutch national holds a master’s of science degree in business econometrics/operations research from Tilburg University in the Netherlands.

POWER PLAY: Hamers has had a difficult few years, navigating the bank during a money laundering scandal that ING settled with Dutch prosecutors at a cost of $900 million in 2018. More recently, Hamers made headlines in June with skeptical comments about the wisdom of EU bank consolidation, even though ING has been rumored to be interested in acquiring Germany’s Commerzbank. “Cross-border consolidation doesn’t help you to create capital efficiency nor liquidity efficiency,” he told reporters at a banking conference. That view puts Hamers somewhat at odds with competitors such as UBS chief executive Sergio Ermotti, who contend that cross-border mergers are inevitable.

PATH TO POWER: Florida native Sussman earned a BS and an MBA at NYU before founding hedge fund Paloma Partners in 1981, making it one of the oldest surviving hedge funds. Sussman is also known for recognizing new talent and staking some of the early hedge funds. He was the original seed backer of D.E. Shaw, the first quantitative hedge fund, which has gone on to become one of the world’s largest and best known. He also invested early on in Paul Singer’s Elliott Management.

POWER PLAY: While he still runs Paloma from Greenwich, Conn., 73-year-old Sussman is becoming better known as a top Democratic donor during the Trump era. The 2020 election may be in its early innings, but Sussman is so far the lead donor in the race, contributing $865,300 during the first quarter of 2019, all of it to Democrats. Last year he was the fifth-largest donor in the pivotal midterm congressional blue wave, giving nearly $23 million to Democrats—more than he gave to Hillary Clinton during her 2016 presidential bid, when he was her top individual supporter. Sussman was formerly married to Rep. Chellie Pingree, a Democrat from Maine.

PATH TO POWER: When Hunt was 2, his 10-month-old baby sister drowned in the bathtub next to him while their nanny was cooking dinner. Despite that tragedy, Hunt grew up in a family with high expectations; his father was an admiral and Hunt is a descendant of one of the early administrators of the East India Company. He studied at Oxford then had a brief stint as a consultant and teaching English in Japan before becoming an entrepreneur in the international education space. He entered politics as a member of parliament in 2005.

POWER PLAY: Hunt has been a key player in British politics for years, serving as the culture secretary for two years and then as health secretary for six, the longest term ever for an MP in that position. He became foreign minister when Boris Johnson resigned in 2018, thrusting him into the middle of Brexit negotiations. Hunt opposed Brexit from the outset, and as foreign secretary he has sought to block a “no deal” exit from the European Union. Following Theresa May’s announcement that she was stepping down as prime minister, Hunt threw his hat in the ring as the only serious opponent to Boris Johnson.

PATH TO POWER: A Madison, Wisc., native, Sprecher attended the University of Wisconsin–Madison, where he obtained a chemical engineering degree before earning his MBA from Pepperdine University. In 1996, he purchased the Continental Power Exchange for just $1. From there, he built what would become Intercontinental Exchange (ICE), which has acquired the likes of the New York Stock Exchange, the American Stock Exchange and NYSE Euronext.

POWER PLAY: Sprecher called 2018 ICE’s best year as a company, pulling in $5 billion in net revenue as well as a 14 percent increase in trading and clearing net revenue. But Sprecher continues to expand ICE’s reach. In 2019, ICE acquired Simplifile, a company that aims to make real estate and mortgage transactions easier. The acquisition further solidifies ICE’s presence in the mortgage industry after its 2018 purchase of MERS, a national electronic mortgage registry.

PATH TO POWER: Kuroda originally planned to be an attorney, but when he went to work for the Japanese Ministry of Finance, they sent him to Oxford to study economics, and he never looked back. Kuroda spent decades at the finance ministry, becoming vice minister in 1999 and then serving in the cabinet and leading the Asian Development Bank. He took the top job at Japan’s central bank in 2013, pledging to reverse the nation’s two-decade-long deflationary slide.

POWER PLAY: Kuroda’s big idea for fixing the world’s third-largest economy was negative interest rates: Rather than paying interest for banks to park their money in the central bank, they would charge them for that service. The hope in 2016 was that this “monetary bazooka” would spur greater lending and liquidity in the Japanese economy. It hasn’t worked out: “Kurodanomics” has largely been seen as a failure. The Bank of Japan announced in April that it would not hit its inflation target until at least spring 2022, according to Reuters.

PATH TO POWER: Memphis-born Jones studied economics at the University of Virginia, then worked at E.F. Hutton, starting out as a clerk. Jones opted out of studying at Harvard Business School and began trading cotton futures on the NYSE. He launched his Greenwich, Conn.–based hedge fund in 1980, but it was his bearish bet on the market just before the 1987 stock market rout known as Black Monday that made him rich—and famous. He also called the 2018 December downturn.

POWER PLAY: His hedge fund, Tudor Investment, is one of the nation’s oldest, and the 64-year-old Jones is worth $5 billion. But perhaps his greatest achievement was starting the Robin Hood Foundation, which has been providing millions of dollars to charities and social programs throughout New York since 1988. Its annual gala is a must for financiers on the city’s social and charity circuit. Earlier this year, Jones joined a growing number of billionaires speaking out about wealth inequality, warning that the risk of a revolution has increased. Last year he started Just Capital, a nonprofit that ranks corporate ethical behavior and is linked to an ETF. This year, Jones also signed the Giving Pledge, created by Bill and Melinda Gates and Warren Buffett in 2010.

PATH TO POWER: Born in Oklahoma, Kravis studied at Claremont McKenna and earned an MBA from Columbia before entering business. He joined Jerome Kohlberg and George Roberts to found pioneering private equity firm KKR in 1976. Since then, KKR has consistently pushed the envelope in private equity, making deals on everything from Motel 6 to RJR Nabisco. In 2006, for instance, it was the first major U.S. PE firm to list shares in Europe.

POWER PLAY: Kravis and Kohlberg both named successors and converted the firm into a corporation over the past two years. But that hasn’t meant that things are slowing down at KKR. Quite the opposite. By mid-2019, the company had achieved staggering numbers: 114 portfolio companies employing more than 750,000 people and generating $123 million in revenue. In June, KKR revealed it was making an almost $8 billion play for Axel Springer, the publisher of Business Insider and Bild, among other publications.

PATH TO POWER: Lagarde swam on the French national synchronized swimming team as a teenager and interned at the U.S. Congress while living in Maryland for a year after high school. She later earned two master’s degrees in France and spent years at international law firm Baker McKenzie. From 2005 to 2007 she served as French minister of trade and in 2011 took charge of the IMF following the ouster of Dominique Strauss-Kahn for assaulting a maid at the New York Sofitel.

POWER PLAY: Lagarde helped guide the IMF through the global financial crisis and won reelection in 2016. Lately she’s been weighing in on the Middle East, arguing that economic development there will be moribund until peace is achieved between Israel and Palestine, and going on the Daily Show to say that, actually, President Trump “has a point” on intellectual property and subsidies issues in China, although she cautioned that tariffs were not the solution. But the biggest news—and the biggest sign of her power—came in early July when European leaders agreed to nominate Lagarde to become the next president of the European Central Bank. If that happens, Lagarde will add to her position as one of the most powerful women in finance.

PATH TO POWER: Pro-Brexit agitator Farage grew up in a troubled home: His father was an alcoholic stock trader who left the family when Farage was 5. Nigel got involved in conservative politics while still in high school and spent the early years of his career trading metals for firms such as Drexel Burnham Lambert in London. He quit the Conservative Party in 1992 when the Maastricht Treaty creating the European Union was signed. Strangely, he was elected to the European Parliament in 1999 and has since served in that body and as the leader of the far-right UK Independence Party in Britain.

POWER PLAY: With Brexit negotiations grinding on and a no-deal exit increasingly likely following the resignation of prime minister Theresa May, Farage has suddenly become a key figure in the global economy. As a representative of the UK at the European Parliament, he’s a linchpin in the negotiations, and his pronouncements have a huge impact on British public opinion. He’s still a loose cannon, though: In June alone he faced accusations of failing to declare a £500,000 political contribution and of having a fundraising dinner with far-right conspiracy theorists.