PATH TO POWER:Yi got his doctorate from Nanjing University and in 1985 joined the Industrial Commercial Bank of China. He would go on to spend more than 30 years at the ICBC, currently the world’s largest lender by assets, eventually becoming its president in 2013 and chairman in 2016.

POWER PLAY: A veteran of China’s financial system, Yi was promoted this year to head the country’s securities regulator, replacing Liu Shiyu. China is eager to increase international access to its $40 trillion financial industry, and in this new role Yi will be at the forefront of that mission. Amid a tumultuous stock market in China—2018 was its worst year in a decade, but it’s been on a tear in 2019—Yi will have his work cut out for him. 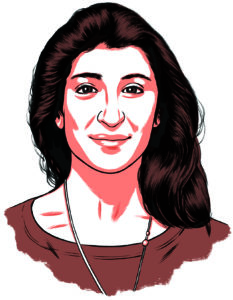 PATH TO POWER: Khan studied at Williams College and dabbled in journalism while in college—writing local news stories in New York’s Westchester County on topics such as a 90-year-old boxing champion and a flu outbreak—before pursuing a career in law. She earned a JD from Yale in 2017 and was already shaking up the regulatory world by the time she graduated. She quickly went on to become a legal fellow in the commissioner’s office at the Federal Trade Commission and then at Columbia Law School.

POWER PLAY: Khan’s legal career has followed an improbable trajectory for one so young. At just 29, she published a legal paper in 2017 that transformed consensus thinking on antitrust law and put the likes of Amazon squarely in the sights of regulators. In essence, Khan argued that low prices were not enough to protect a company from trust-busting, as had long been the case, because data collection practices or control of shipping and warehousing, for instance, could give companies such as Amazon structural power over the economy even if they seemed to benefit consumers. The paper was a bombshell, drawing coverage from influential media outlets and galvanizing the FTC and Democrat-controlled House, which subsequently hired Khan to help them build their case.

PATH TO POWER: Cunningham was named the NYSE’s 67th president in May 2018, becoming the first woman to hold that position. After interning at the NYSE in 1994 while studying for her industrial engineering degree at Lehigh University, Cunningham worked at the exchange until 2005. Exasperated by the NYSE’s slow approach to embracing technology, Cunningham left to pursue a nine-month culinary training program. In 2007 she returned to Wall Street, becoming NASDAQ’s director of capital markets and head of sales for U.S. transaction services. In 2012, Cunningham rejoined the NYSE. She was appointed the exchange’s chief operating officer in 2015.

POWER PLAY: Cunningham is presiding over the NYSE during a boom market for IPOs, including companies such as Uber. While Uber’s IPO garnered criticism for failing to meet Wall Street’s elevated expectations, Cunningham takes a long view, arguing that investors should think of such firms’ success in terms of a marathon, rather than a sprint. Cunningham also champions modernizing the NYSE’s rules, noting the exchange no longer requires companies to be profitable at the time of listing, allowing tech startups to “find their way to profitability.” Asserting her leadership among the exchanges, Cunningham sued the SEC last February for piloting a program to limit fees and rebates that stock exchanges and brokers pay one another. The next day, NASDAQ and CBOE followed with their own lawsuits.

PATH TO POWER: Fitzpatrick cut her teeth at Chicago-based hedge fund O’Connor & Associates after studying at Wharton. The male traders on the American Stock Exchange made wagers on how long she would last. Little did they know that she would rise to become CIO at O’Connor, which was acquired by UBS, and then in 2017, CIO at Soros Fund Management, which boasts $27 billion in AUM and is one of the most closely watched hedge funds in the world.

POWER PLAY: Fitzpatrick stepped into big shoes. George Soros is perhaps the world’s most famous hedge funder manager, and expectations for Fitzpatrick were unusually high. Her tenure is off to a rocky start. After a high-profile hire of fund manager Adam Fisher that included millions in annual bonuses or a commitment to back him with up to $1.5 billion if his tenure didn’t work out, Fitzpatrick pulled the plug in February, according to the Wall Street Journal. The decision came after Fisher’s portfolio fell by around 2 percent, and it has observers questioning Fitzpatrick’s decisionmaking as she fires traders and claws money back from outside funds. So far she retains the support of the Open Society Foundations’ investment board, but Soros’ son Robert, a former CIO of the firm himself, has questioned her leadership.

PATH TO POWER: Born in Hamburg, West Germany, to American expats, Fed governor Brainard spent her childhood in communist Poland. Returning to America, she earned a master’s and PhD in economics at Harvard. Brainard later taught economics at the MIT Sloan School of Management. She worked as an economic advisor in both the Clinton and Obama administrations before joining the Fed in 2014.

POWER PLAY: As the lone non-Trump appointee sitting on the Federal Reserve Board, Brainard has established herself as a voice of caution against the Trump administration’s rolling back of banking regulations. “I am concerned that we may be whittling away at that core resilience of our financial system,” she told Yahoo Finance in June. A proponent of increasing inflation to encourage growth, Brainard has sounded an alarm for middle-class families, citing Fed surveys that found 60 percent of middle-income families do not have enough savings to cover three months of expenses. “There is a palpable sense that the opportunity to reach the middle class and remain in it is receding for many middle-income households,” she said to Reuters in May.

PATH TO POWER: Andreessen studied computer science at the University of Illinois at Urbana-Champaign and soon became one of the most influential entrepreneurs and investors in Silicon Valley. Andreessen moved to California in 1993 and cofounded Netscape, which had an IPO two years later and became an early power player in the tech industry. He went on to have a string of successes and cofounded his venture capital firm with Ben Horowitz in 2009, subsequently making a series of smart bets on the likes of Facebook, Skype and Airbnb.

POWER PLAY: The venture capital and tech industries have in many ways followed the lead of Andreessen Horowitz, thanks in part to Andreessen’s influential blog. In 2019, the firm made a big change, registering as a financial advisor to allow it to take riskier positions on investments such as cryptocurrencies without running afoul of the SEC. And the firm is raising a new multibillion-dollar fund to complement its new status.

PATH TO POWER: Erdoes grew up in Winnetka, Ill., and studied math at Georgetown and earned an MBA from Harvard before embarking on a career in finance. Erdoes joined J.P. Morgan Asset Management in 1996 and was head of J.P. Morgan Private Bank by 2005. She became CEO at J.P. Morgan Asset & Wealth Management in 2009 and is widely seen as a potential heir to JPMorgan Chase CEO Jamie Dimon.

POWER PLAY: The J.P. Morgan Asset and Wealth Management division boasts some $2.8 trillion in AUM, and Erdoes is widely regarded as an excellent steward of the division, as well as a passionate advocate for women in the space. But the recent promotion of longtime CFO Marianne Lake to be CEO of the consumer lending side has thrown into question whether she’s still the lead contender for the top job when Dimon retires.

PATH TO POWER: Loeb, a native Californian, received an economics degree from Columbia University, then worked in a series of Wall Street jobs at such firms as Jefferies and Citigroup before starting his hedge fund, Third Point, in 1995. Loeb earned early notoriety for his “poison pen” letters to CEOs, giving him a reputation for being something of a wild-man shareholder activist, an image he has largely shed. Loeb is now one of the most prominent hedge fund activists, running $14 billion.

POWER PLAY: The 57-year-old Loeb, worth $2.8 billion, proved his activist mettle last year when he managed to wrangle two board seats at the faded icon Campbell Soup, even though he didn’t have enough votes to win a proxy battle with the company. This year, he took on Japanese electronics and entertainment giant Sony, despite a failed 2013 attempt to convince the company to sell part of its entertainment business. Though Third Point had a rare double-digit loss last year, it has come back in 2019 with a gain of about 9 percent through May on the back of its activism plays.

PATH TO POWER: Finucane became a serious player in banking in 1995 when she was the head of corporate affairs and marketing for Fleet Financial. The Boston-based bank then merged with BankBoston before ultimately merging with Bank of America in 2004. Following the financial crisis, Finucane served as BofA’s global chief strategy and marketing officer. She was appointed vice chairman in 2015, and she is also the chairman of the board of Bank of America Merrill Lynch Europe.

POWER PLAY: BofA has almost doubled its stock price over the past two years and surprised Wall Street by earning $7 billion in net income in 2018’s fourth quarter, $700 million more than analysts expected. Even better, BofA saw a 6 percent increase in net income for the first quarter of 2019. With the hurt from the financial crisis largely in BofA’s rearview mirror, Finucane now faces her next challenge: sorting through the European banking morass in the turmoil of Brexit. The bank already spent $400 million switching its European headquarters from London to Dublin in 2017. Now the bank has moved 100 bankers to Dublin, with 400 set to move to Paris, the location of BofA’s new EU broker-dealer.

PATH TO POWER: Ocasio-Cortez grew up in the Bronx and Westchester County and attended Boston University, where she studied international relations and interned for Ted Kennedy. Her father died in 2008 while she was a sophomore, leaving the family struggling to keep their home. After she graduated, Ocasio-Cortez worked as a bartender at Flats Fix, a taqueria on New York’s Union Square, and was an organizer for Bernie Sanders’ 2016 campaign. She trounced longtime Democratic Rep. Joe Crowley in the 2018 primary, showing a new vitality in the left wing of the Democratic Party.

POWER PLAY: Ocasio-Cortez won office as an upstart and has since built a brand for herself that is as much a cult of personality as a serious political movement. Nevertheless, she’s tapped into the same leftist populism that powered Sanders’ 2016 campaign and the earlier Occupy Wall Street movement. While her biggest policy proposal—the Green New Deal—was undercut by a ham-handed rollout, it did push climate change to the top as a critical issue for Democratic primary contenders. And AOC’s aggressive progressivism has forced party head Nancy Pelosi to pay attention.