WORTH
Published on September 17, 2019
SHARE
90. Raghuram Rajan Professor of Finance, University of Chicago

PATH TO POWER: The son of an official in India’s Intelligence Bureau, Rajan grew up traveling the world. He earned his PhD from MIT and went on to serve as the chief economist and director of research at the International Monetary Fund from 2003 to 2006 and as a governor of the Reserve Bank of India from 2013 to 2016. Today, he teaches at the University of Chicago and authors books on global finance.

POWER PLAY: Rajan is now a leading contender in the competition to succeed Mark Carney as governor of the Bank of England. Were he to succeed Carney (becoming the second non-British banker in a row to take the role; Carney is Canadian) he’ll face huge challenges, including steering the British economy through Brexit and navigating the various political parties in Britain, including politicians who have their own plans for the theoretically independent bank.

PATH TO POWER: Wikramanayake was born in the UK to Sri Lankan parents and studied commerce and law at the University of New South Wales. She began her career as a corporate lawyer with the firm Blake Dawson Waldron before joining Australia’s Macquarie Group in 1987. Prior to becoming CEO in December 2018, Wikramanayake was head of the bank’s asset management unit.

POWER PLAY: Less than a year into heading Macquarie, Wikramanayake has impressed bank observers with bold infrastructure investments during a period of market volatility. Previously, as head of Macquarie’s asset management division, Wikramanayake earned more than the combined pay of chief executives of Australia’s four biggest banks: $17 million in the period ending March 31, 2019. Now directing Australia’s most successful international financial services company, Wikramanayake is leading Macquarie to record profits and is bullish about raising billions in new equity to deploy in Australia, Asia, the United States, Europe and the UK. “When the world turns defensive, infrastructure is an asset class it likes to go to, and that creates good capital raising opportunities for us,” she told Australian business column Chanticleer in February. 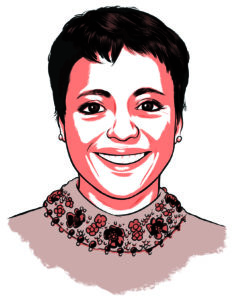 PATH TO POWER: Hobson graduated from Princeton in 1991 and joined Ariel Investments, a Chicago-based, African American-owned money manager, as an intern. By 2000 she had ascended to become president and director. Today the firm has $13 billion under management. As a black woman, Hobson occupies a rare position in the world of finance, and her influence comes not just from her wealth and intelligence, or the fact that she’s one half of a remarkable power couple (Star Wars creator George Lucas is the other) but from her status as a pioneer.

POWER PLAY: In June 2018, when Starbucks founder Howard Schultz stepped down from his role as chairman of the board, contemplating an ill-fated presidential run, Hobson, already a board member, ascended to the role of vice chair. Starbucks had a difficult year, including a public relations disaster after two black men were arrested in a Philadelphia location while waiting for others to arrive for a business meeting. Elevating Hobson, a relentless advocate for diversity in corporate America, was a recognition of the need for change. Later that year, she told Fortune that, when it comes to diversity in corporate America, there was far too much talk and too little action. “I married Yoda’s dad,” she said, “and Yoda said, ‘Do or do not, there is no try.’” Hobson is probably one of the best-connected people in America, and her positions at the top of a major consumer brand, in Hollywood and in the financial industry give her unique influence over pillars of the American economy.

PATH TO POWER:The Bank of England is Carney’s second central bank; before taking his role there, he steered the Bank of Canada through the Great Recession and its fallout. Carney grew up in Edmonton, Canada, studied at Harvard and worked at Goldman Sachs for 13 years before going into public service.

POWER PLAY:After seven years at the helm of the UK’s central bank, Carney, one of the most respected figures in international finance, will be leaving in early 2020. With British politics in disarray and Brexit far from resolved, it’s probably a good time to get out. Carney gave his last speech in the role in June, announcing several plans to modernize the bank. Among them, he said that the bank would look into allowing new, digital currencies to operate within the British system. That was good news for Facebook, which is planning to roll out a new cryptocurrency, Libra, early next year. Carney said he was keeping an “open mind” about that project. 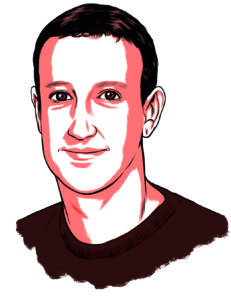 PATH TO POWER: When Zuckerberg founded
thefacebook.com in his Harvard dorm room in 2004, it would have been easy to dismiss him as another precocious nerd. He’s since turned Facebook into the world’s largest social network, and he’s now the nerd at the head of a company capable of tipping elections and crushing competition. With the acquisitions of WhatsApp, a popular messaging app, and Instagram, billions of people increasingly live their digital lives in a universe owned by Zuckerberg.

POWER PLAY: Zuckerberg and Facebook are making a play against the entire global financial system at a time when he is increasingly under pressure from activists, regulators and lawmakers for a series of privacy scandals, enabling election rigging, failing to prevent the spread of fake news and anticompetitive behavior. Facebook cofounder Chris Hughes put Zuckerberg on blast in the New York Times in May, calling for the breakup of the social media empire that helped make him rich, and Washington regulators and legal scholar Lina Khan are beginning to build an antitrust case against tech giants such as Facebook. Zuckerberg appears unperturbed and in June announced the creation of Libra, a cryptocurrency backed by a basket of fiat currencies, which will theoretically enable global commerce via the Facebook platform. Critics argue that Libra is an end run around central banks and puts developing-world economies in jeopardy, and regulators moved quickly after the announcement to try and hobble the cryptocurrency.

PATH TO POWER: Black faced adversity early in life: While he was studying at Harvard Business School, Black’s father committed suicide. Yet that tragedy didn’t stop him. He rose to prominence at Drexel Burnham Lambert. When that firm imploded in the face of federal racketeering charges, Black struck out on his own in 1990 and founded Apollo Global Management, which would become one of the largest private equity firms in the world.

POWER PLAY: At the end of 2018, Apollo reported around $280 billion in AUM, but that surged in the first quarter of 2019, reaching $303 billion by May 2019. And in a bid to retain new investors, Black announced that the firm would be converting from a partnership to a corporation, following in the footsteps of rivals Blackstone and KKR.

PATH TO POWER: The Baltimore native attended Williams College and earned her MBA from Vanderbilt. In 1993, Friedman started her career at NASDAQ, where she worked until 2011, when she joined the Carlyle Group as CFO. After assisting in Carlyle’s IPO, Friedman returned to NASDAQ as president in 2014. A black belt in tae kwon do, Friedman was named NASDAQ’s CEO in 2017.

POWER PLAY: Friedman oversaw NASDAQ’s September 2018 acquisition of Swedish financial technology firm Cinnober for $190 million, maintaining the exchange’s technological edge in a deeply competitive industry. She continues to be a leader in embracing technology. In June 2019, Friedman partnered NASDAQ with crypto data provider CryptoCompare to release a cryptocurrency pricing product targeted at institutional investors. Cryptocurrency “deserves an opportunity to find a sustainable future in our economy,” Friedman wrote in a LinkedIn post earlier this year.

PATH TO POWER: Smith grew up in Great Neck, N.Y., and received a degree in economics at Wharton before embarking on a Wall Street career. He started in the M&A division of French bank Société Générale before joining hedge fund Ramius, which was founded by Peter Cohen, the former chairman and CEO of Shearson Lehman Brothers. Smith helped launch the Starboard strategy at Ramius and spun it out independently in 2011.

POWER PLAY: A relative unknown when he launched Starboard, Smith became famous for criticizing the free breadsticks at Darden Restaurants’ Olive Garden chain, part of a high-stakes campaign that led to a rare takeover of the company’s entire board in 2014. Since then, Smith has become a force in corporate America known for his turnaround expertise. Early in 2019, Starboard shot to the top of the activist tables by announcing seven new investments worth $2.3 billion—which accounts for about half of Starboard’s assets under management. At least three of the new stakes were headed to proxy battles.

PATH TO POWER: Berman grew up in Trenton, N.J., the son of a real estate developer. He worked as an associate to Lawrence Walsh, the independent counsel investigating the Iran-Contra scandal, and was an assistant U.S. attorney in the Southern District in the early 1990s. Later he went into private practice, spending a quarter century at Mudge Rose and Latham & Watkins. After President Trump fired Preet Bharara as U.S. attorney, the Justice Department appointed Berman on an interim basis. Senator Kirsten Gillibrand (D-New York) opposed the nomination, fearing the office would be politicized, but after the DOJ failed to nominate a permanent U.S. attorney for the office, Manhattan federal judges voted to keep Berman in the role. It was a bumpy rise to one of the most powerful law enforcement offices in the U.S.; the Southern District of New York is often jokingly referred to as the “sovereign district” by prosecutors due to its aggressiveness and prosecutorial independence from the DOJ.

POWER PLAY: The normally high-stakes job is even more so in the Trump era, with the southern district of New York overseeing multiple investigations involving the president’s associates, companies and even family members. Berman, a former law partner with Rudy Giuliani, chose to recuse himself from his office’s investigation into another of the president’s former personal lawyers, Michael Cohen. But the Southern District has plenty of other matters to keep Berman busy: In April, prosecutors in Berman’s office indicted the first pharmaceutical CEO to be criminally charged in connection with the opioid crisis. And according to Bloomberg, Berman’s office is leading a multinational investigation into dozens of stock pickers who have reportedly infiltrated major investment banks to make insider bets on megadeals.

PATH TO POWER: Patterson started her career as a reporter for the Associated Press after studying journalism at the University of Florida. She subsequently earned an MA in international relations at Johns Hopkins and an MBA at New York University. She entered the world of finance, becoming chief markets strategist at J.P. Morgan Asset Management and joining multifamily office Bessemer Trust in 2012.

POWER PLAY: With more than $100 billion in assets under supervision, Bessemer boasts a 98 percent client retention rate. In other words, it’s highly trusted by some of the world’s wealthiest families. Patterson’s sharp insights and stellar communication skills are one reason for this. Another is that she is a master at protecting and growing fortunes. Recently, she’s been tracking a slowing global economy and warning of drag from European markets.