The Most Impactful Families in America

These 25 families are quietly making major contributions to the country and their communities.

WORTH
Published on October 23, 2019
SHARE
The Gund Family Cleveland

How They Created Their Wealth: Prohibition caused many a brewery to close, including that of George Gund II’s father, which Gund II was running at the time. But in 1919, Gund II had bought decaf coffee company Sanka. And by 1927, he had sold the coffee company to Kellogg’s. His payment? Ten million dollars in the cereal company’s stock. From that impressive point, the Gunds have been involved in a slew of businesses and industries, including the Cleveland Trust Co. and a cattle ranch. Gund II’s kids seem to have inherited his work ethic: Gordon is one of the owners of the Cleveland Cavaliers, Graham is the president of the Gund Partnership architecture firm, Agnes is president emeritus of the Museum of Modern Art in New York and chairman of the museum’s International Council and Geoffrey is the president and treasurer of the George Gund Foundation’s Board of Trustees.

Their Impact: George Gund II founded his eponymous foundation in 1952. After his death in 1966, much of his wealth went to the organization, which has given $722 million in grants to help fund initiatives focused on bettering the Cleveland community through the arts, economic development and education, among other areas. This year alone, the foundation has issued over $14 million in grants. George himself donated to institutions such as Kenyon College and the Cleveland Institute of Art. His children share his philanthropic spirit. His son George III founded the Iara Lee and George Gund III Foundation in 2004, although the foundation ceased operations following his death in 2013. Gordon cofounded the Foundation Fighting Blindness in 1971 after going blind the prior year. And Agnes is a well-known patron of the arts and advocate for criminal justice initiatives such as the Art for Justice Fund, which receives the proceeds from art she sells out of her personal collection. One notable example: Roy Lichtenstein’s Masterpiece painting, which jumpstarted the fund. “Collectors understand the transformative power of art,” Agnes said, according to Art for Justice’s site. “Now we can use specific works to improve lives and drive change.”

How They Created Their Wealth: George Kaiser might be one of the world’s quietest billionaires. He began working at his father’s company, Kaiser-Francis Oil, in 1966, and by 1969, he was running it. Kaiser expanded into banking in 1991 with his purchase of Bank of Oklahoma. By 2010, George’s family’s once-small oil company had become regarded as one of America’s most substantial private oil and gas exploration companies, while the bank had 87 branches and $17.6 billion in assets. George now serves as chairman to Bank of Oklahoma’s holding company, BOK Financial Corp. Passionate about philanthropy, George founded the George Kaiser Family Foundation in 1998. Today, his children—Emily, Leah and Philip—all sit on its board of directors.

Their Impact: One of the world’s wealthiest people, George Kaiser is anything but flashy. At 77, he devotes much of his time to the George Kaiser Family Foundation, which helps provide opportunities for disadvantaged children in Tulsa, Okla. Kaiser is also one of 40 signers of the Giving Pledge, which states he’ll give over half of his money to philanthropic causes. And as if that weren’t enough, George also created the Tulsa Community Foundation in 1998 after recognizing that Tulsa was the only major U.S. city to not have its own foundation.

“In the glory days of Tulsa, we could rely on ad hoc assemblages of major corporate and individual leaders to help pursue significant challenges or opportunities for the city,” George wrote at the time. “But after several waves of corporate and individual outmigration and death (another style of outmigration, I suppose), we no longer could rely upon the kind of leadership required on an impromptu basis. To continue the city’s progress, I felt we needed a permanently functioning mechanism to fulfill that role.”

Outside of their family-initiated foundations, Emily, Leah and Philip are all philanthropists individually. Emily, a former Reuters journalist, is chairman of the Global Press Institute and invests in media companies advocating for communities that are not frequently covered by the media. Leah is a consultant for nonprofits and an advocate for the arts, now serving on DanceWorks Chicago’s board. And Philip is a restaurateur and cofounder of the Center of the Universe Festival, a nonprofit music event in Tulsa. He has also served on many boards, including that of TulsaNow.

How They Created Their Wealth: E. Bronson Ingram II founded manufacturing giant Ingram Industries in the late ’70s. After his death in 1995, his wife, Martha Rivers Ingram, took over as chairman and CEO. Their son John R. Ingram came into the company in 1986 and is now the chairman, as well as chairman of Ingram Content Group, the largest wholesale book distributor globally, housing over 14 million titles. His brother Orrin H. Ingram II is the CEO of Ingram Industries, and their other brother, David Bronson Ingram, is chairman of the board of Ingram Entertainment. Valued at over $2 billion as of 2018, Ingram Industries is one of the nation’s largest privately held companies.

Their Impact: If one thing is apparent about the Ingram family, it’s their passion for philanthropy. During his life, E. Bronson Ingram II was a huge proponent for Vanderbilt University, serving as the board’s chairman from 1991 to 1995 and helping the school raise $500 million. In addition to his work with Vanderbilt, he also served on various boards for organizations bettering Nashville, such as Pencil, which focuses on the city’s public education system.

Like her husband, Martha was also chairman of Vanderbilt’s board. “I think she tried to imagine a Vanderbilt that would still be Vanderbilt but would take these values of friendship and community and implement them in a new, fresh way,” the university’s former chancellor Nicholas Zeppos told Vanderbilt Magazine, referencing the fact that Martha played a big part in transitioning the university to become a residential college. A few years after Bronson’s death, the family made what the New York Times regarded at the time as “the largest private gift ever made to an American college or university” by awarding Vanderbilt $300 million in Ingram Micro stock. Martha and Bronson’s children are charitable on an individual level, too, with David making donations to aid victims of natural disasters, such as the earthquake in Haiti and Hurricane Katrina, and John serving on Vanderbilt’s Board of Trust. 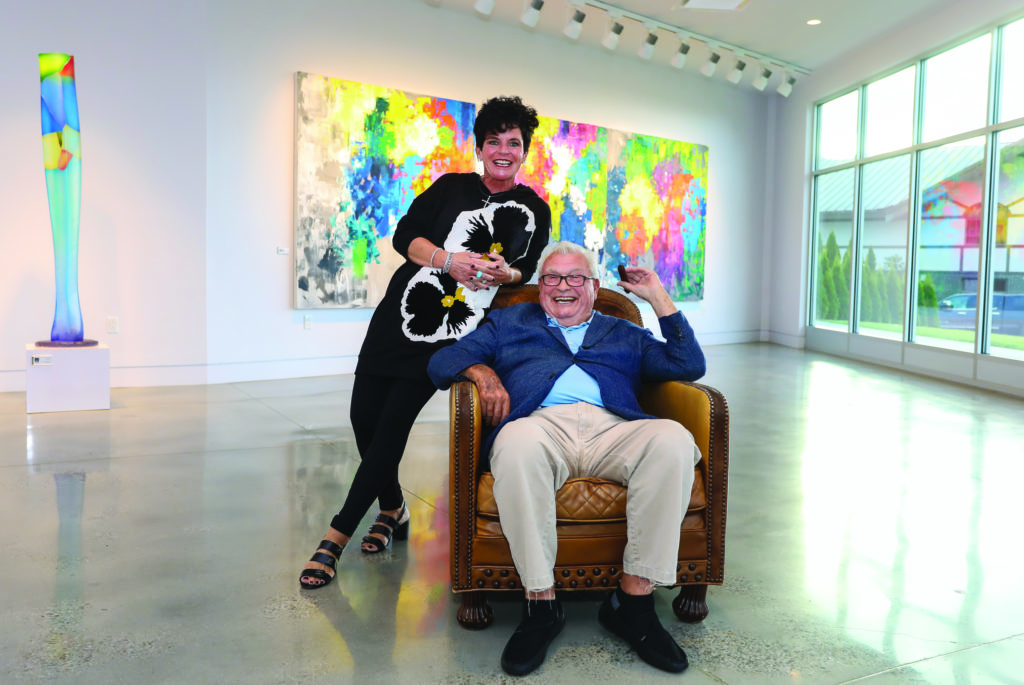 How They Created Their Wealth: Joseph A. Hardy III started his own company, Green Hills Lumber, with Ed Ryan, founder of Ed Ryan Homes, in the late 1940s. Hardy left Green Hills in 1955, and he and his two brothers went on to establish a cash-and-carry lumberyard in Eighty Four, Pa., the following year. The company would come to be called 84 Lumber, after the town, and now claims to be the largest privately owned building materials supplier. “Internal drive and entrepreneurial spirit made Joe Hardy open 84 Lumber,” says Frank Cicero, COO, who’s been with the company for 36 years. But Hardy didn’t stop there. He and his daughter, Maggie Hardy Knox, bought the Nemacolin Woodlands Resort in Farmington, Pa., in 1987. Today, Hardy Knox is president and owner of both companies.

Their Impact: Hardy, 96, has donated to numerous organizations throughout his life, including the Boy Scouts and Red Cross. Under his leadership, 84 Lumber created a partnership with Habitat for Humanity. With Hardy Knox leading the charge, the company has started a partnership with the Fisher House Foundation, which builds houses in which veterans and their families can stay while the vets receive treatment at nearby VA hospitals. She has committed $500,000 to the organization over the next three years. “As a company, we give over $1 million to different organizations throughout the year,” says Amy Smiley, 84 Lumber’s VP of marketing. Says COO Cicero, “Maggie’s true love is seeing people succeed and watching them grow.” This is evident in the many scholarship programs available to 84 Lumber and Nemacolin employees and their families.

How They Created Their Wealth: Homer Scott Sr. began working in the construction industry in 1931 at Peter Kiewit Sons, where he was one of the company’s initial employees and a senior executive by the time he retired. He bought as much stock as possible. “The story goes [that] Mr. Kiewit said, ‘Homer, I’m not going sell you any more stock. You ought to go start a ranch or something,’” says Jim Scott, one of Homer’s sons and the chairman of First Interstate BancSystem. In 1943, he did just that by building Padlock Ranch, which today is one of the country’s biggest cattle ranches, with 450,000 acres and 12,000 beef cattle. In 1968, Homer branched into banking when he bought the Bank of Commerce in Sheridan, Wyo. In the ’70s, he bought the Security Trust and Savings Bank in Billings, Mont., and turned it into his holding company; in 1984, it became known as First Interstate Bank.

Their Impact: These days, First Interstate is one of the largest and most charitable family-held banks in the nation. Since its founding, the First Interstate BancSystem Foundation has donated $30 million to charity. The foundation focuses on advancing the communities the bank serves—primarily through education, economic development and child and family services. Homer and his wife, Mildred, have passed away, but the Homer A. and Mildred S. Scott Foundation carries on, giving 70 percent of its grants to organizations within 30 miles of Sheridan. “They really loved Sheridan,” says Jim Scott. “And so we followed our dad’s example.” Jim and his four siblings have created six foundations among them. Jim has two—the Jim and Chris Scott Foundation and the Foundation for Community Vitality, which concentrates on Native American issues in Billings. “As time goes on, I think philanthropy will become an even more important part of the family’s legacy,” says Jim.