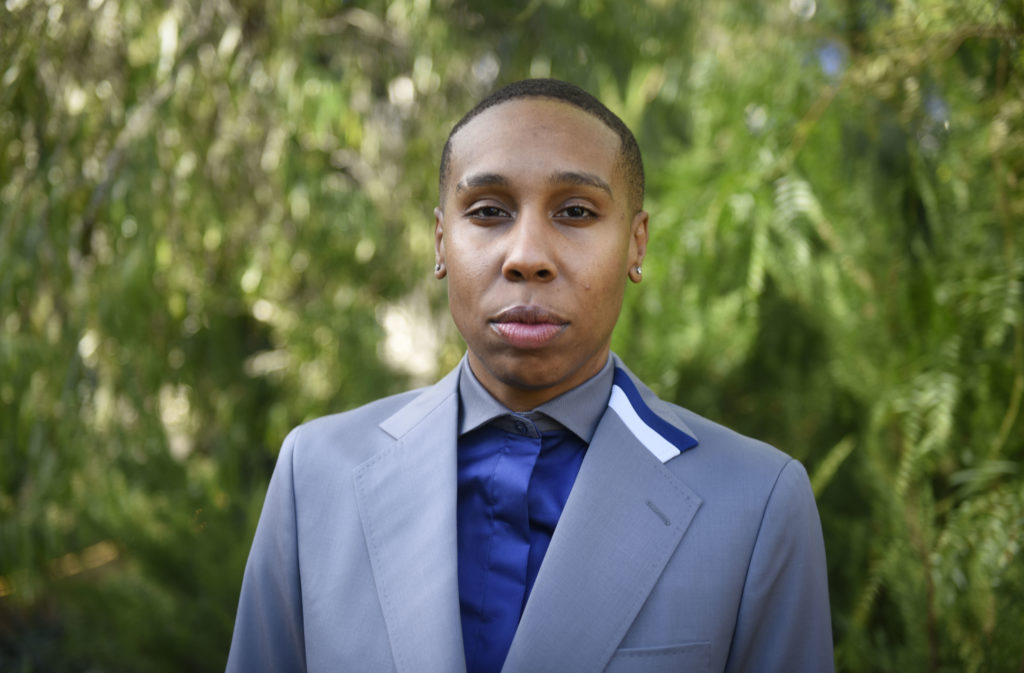 Screenwriter and actress Lena Waithe is changing the cultural conversation one story at a time, introducing characters and storylines rarely seen in entertainment. One big example: In 2017, she was the first black woman to win an Emmy for writing for a comedy series, for an episode of Netflix’s Master of None, about coming out as a lesbian to one’s mother.

In 2019, Waithe produced Queen & Slim, a movie about a black couple on the run after one of them shoots a white policeman in self-defense and becoming what a Vulture review called “folk heroes in a narrative of resistance and police brutality.”  She is also the creator of The Chi, a Showtime drama about life on Chicago’s troubled South Side.

Waithe was raised in that neighborhood by a single mother who encouraged her ambitions to be a television writer. She earned a degree in cinema and television arts from Columbia College Chicago in 2006 and soon headed to Los Angeles. Waithe has since appeared in several comedy series, in addition to racking up screenwriting credits.

The openly gay Waithe consistently speaks out about issues of race and sexuality. As she told the website The Undefeated, “I think your art is stunted when you’re trying to be something you aren’t.” 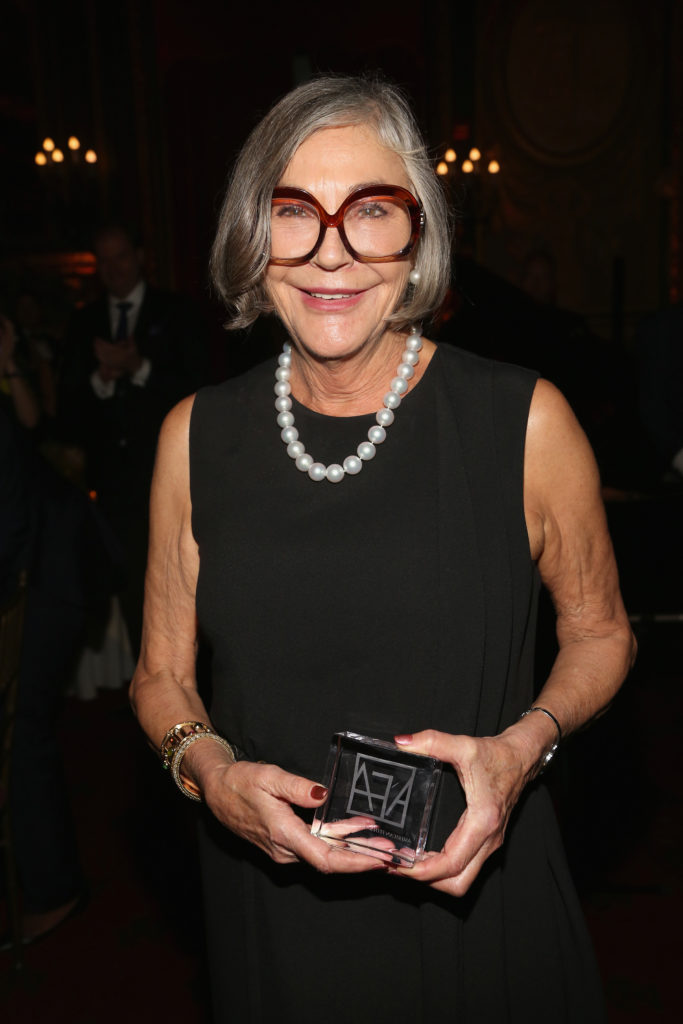 Alice Walton, the 70-year-old heir to the Walmart fortune built by her father, Sam Walton, is using her $53 billion fortune to promote widespread access to great art.

One of today’s most prominent arts patrons, Walton launched a foundation called Art Bridges in 2017. Collaborating with museums and institutions of all sizes and in all regions of the country, Art Bridges is creating and funding exhibitions, bringing together art from museums, private collections, foundations and a collection established as a part of Art Bridges.

Metropolitan Museum of Art trustee Charles Diker and Ford Foundation president Darren Walker are on Art Bridges’ star-studded board of directors. “Outstanding artworks are in museum vaults and private collections,” Walton has said. “Let’s make that art available to everyone.”

Walton, reportedly the second-richest woman in the world, represents a new generation of philanthropy that seeks to support more diverse artists and make work more accessible. In 2011, prior to launching Art Bridges, she founded the Crystal Bridges Museum of American Art in her hometown of Bentonville, Ark.—an area not previously known for ambitious cultural institutions.

Walton is an avid collector of American art and has significant holdings of work by such artists as Thomas Cole, John Singer Sargent, Marsden Hartley and Norman Rockwell. 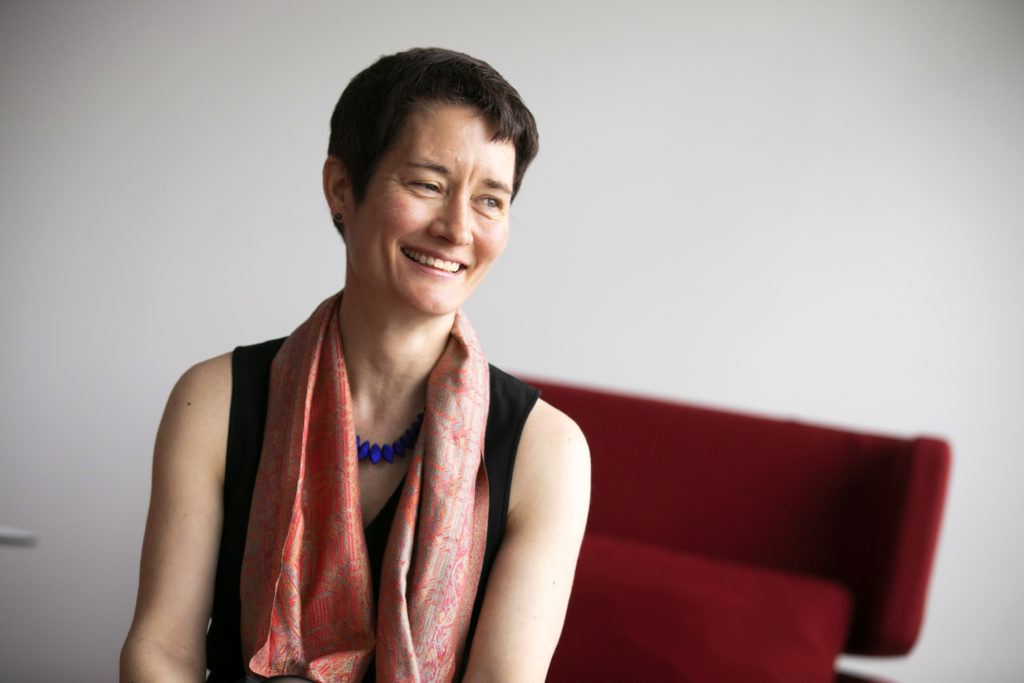 Last July, architect and scholar Sarah Whiting became the first woman to lead the Harvard Graduate School of Design since its 1936 founding. Whiting, a GSD professor earlier in her career who served most recently as dean of Rice University’s School of Architecture, is part of a growing cadre of women heading the nation’s most prestigious architecture and design schools. Among Whiting’s colleagues who are influencing the future of how Americans live: Ila Berman at the University of Virginia (who assumed the post from Elizabeth Meyer), Amale Andraos at Columbia University, Monica Ponce de Leon at Princeton, Deborah Berke at Yale and J. Meejin Yoon at Cornell. While Whiting says she dislikes being referred to as “first woman…” she also says it’s high time. “This should have happened a while ago,” she told Architectural Digest. “I think it’s good for us to be reminded of that fact and for female and male students to see me in this position and for it to become natural.” 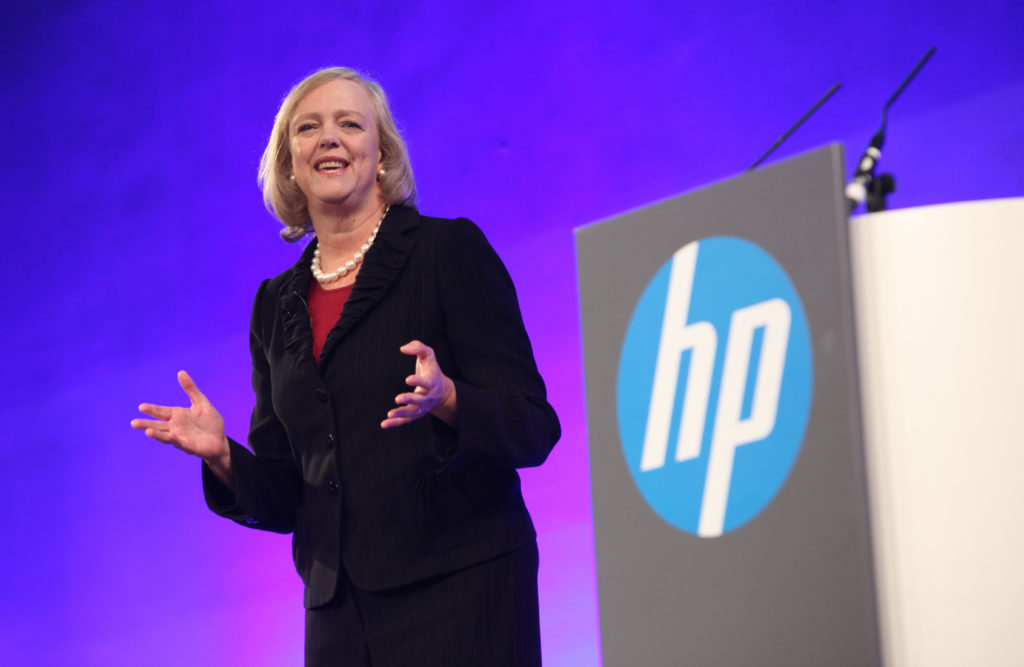 Meg Whitman has been breaking ground for a while. She did it in the late 1990s and early 2000s, when she was the rare female president and CEO of a major company, taking eBay from 30 employees and $4 million in revenue in 1998 to 15,000 employees and $8 billion in revenue by 2008; then in 2011 she became CEO of a little tech firm called Hewlett Packard. Whitman has been a political groundbreaker as well, most notably with a serious campaign to become the first female governor of California in 2010 (she lost to Jerry Brown). She’s not done yet. In 2018, Whitman became the CEO of Quibi, a streaming service that will allow consumers to stream 10-minute-or-less episodes of original content solely on mobile devices. Launching in early April, Quibi will allow its TV shows and movies to be watched both vertically and horizontally (a function the company calls “Turnstyle”) and will provide subscribers with three hours of brand new, original content every weekday. If it takes off, Quibi could propel us into the future of streaming, and Whitman will have done it again. 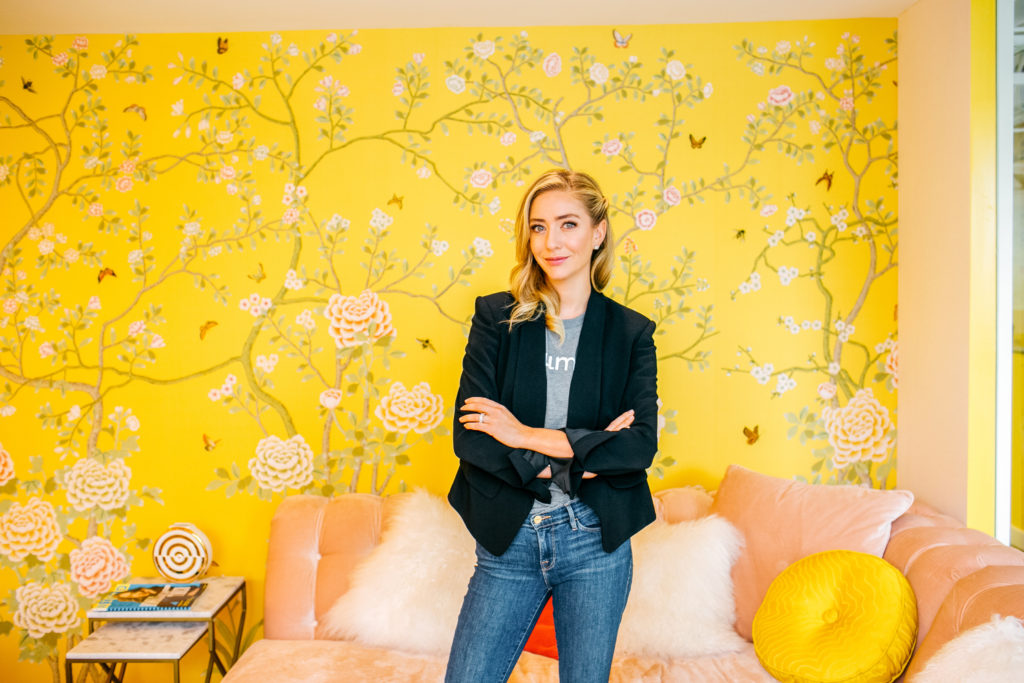 Whitney Wolfe Herd is only 30, but has already had a remarkable career. She is the cofounder of hookup app Tinder and founder and CEO of dating app Bumble, and she recently became CEO of Bumble’s parent company MagicLab. But though her rise has been rapid, it hasn’t always been easy.

Taking a job out of college at incubator Hatch Labs, Wolfe Herd became part of the team that launched Tinder. Two years later, she left the company and sued it for sexual harassment, reportedly receiving a million-dollar settlement. In 2015, under the auspices of tech firm MagicLab and its founder Andrey Andreev, Wolfe Herd started Bumble, a dating app that allows only women to make the first outreach. Bumble soon became one of the world’s most successful dating apps.

But in August 2019, Forbes published an article alleging a racist and misogynistic work environment at MagicLab. The revelations were deeply problematic for a company that owned a female-centric dating app, and in November Andreev sold his ownership stake in the company, which was valued at $3 billion, to Blackstone. Wolfe Herd took his place as CEO while retaining her reported 19 percent ownership in MagicLab.

Now Wolfe Herd hopes to make the world of app-based dating a safer, friendlier one for women. Austin, Texas-based Bumble already prohibits nudity and images of guns, pornography and drugs, and Wolfe Herd has led a push in the Texas state legislature to enact a law that would make it a misdemeanor to send an unsolicited nude or sexual photograph electronically. Wolfe Herd, who was pregnant with her first child last year, has also introduced family-friendly policies at Bumble, including four months of parental leave. 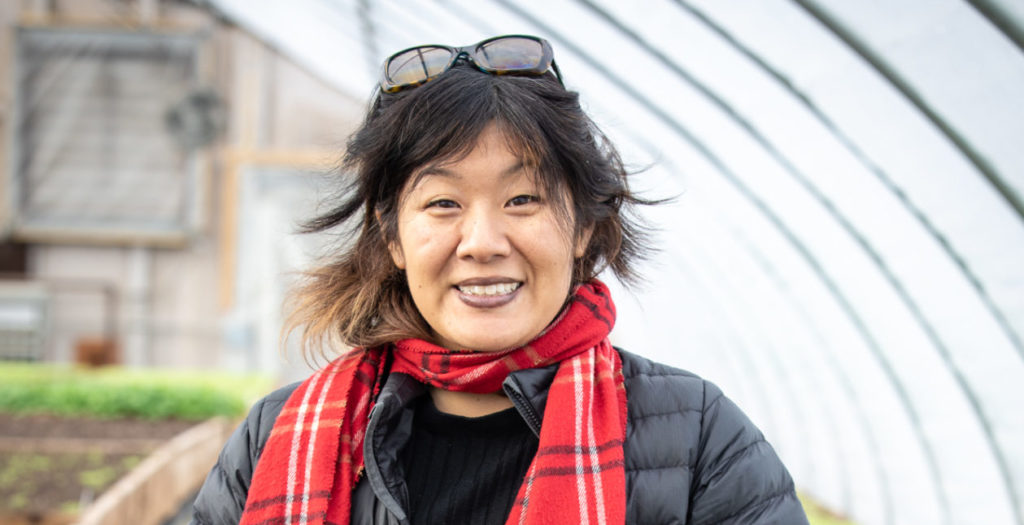 A self-described “big city person” from Westchester County, New York, Amy Wu arrived in Salinas, Calif., to cover agriculture as a reporter for the Salinas Californian in 2015. Inspired by the women who were slowly but surely adding their technological savvy to the deeply male, $9 billion industry, Wu made the documentary From Farms to Incubators: Telling the Stories of Minority Women Entrepreneurs in the Salinas Valley and Beyond. Since then, Wu has become a fierce advocate for women in this space, chronicling their lives in film and photography, holding networking events and penning the upcoming book From Farms to Incubators: Telling the Stories of Women Innovators in Agtech (Linden Publishing, early 2021). “These women are hoping to make a difference,” Wu says. “They have the talent, creativity and innovation to create solutions for farmers and solve problems like food waste and labor shortages. They’re also relentless as entrepreneurs.” 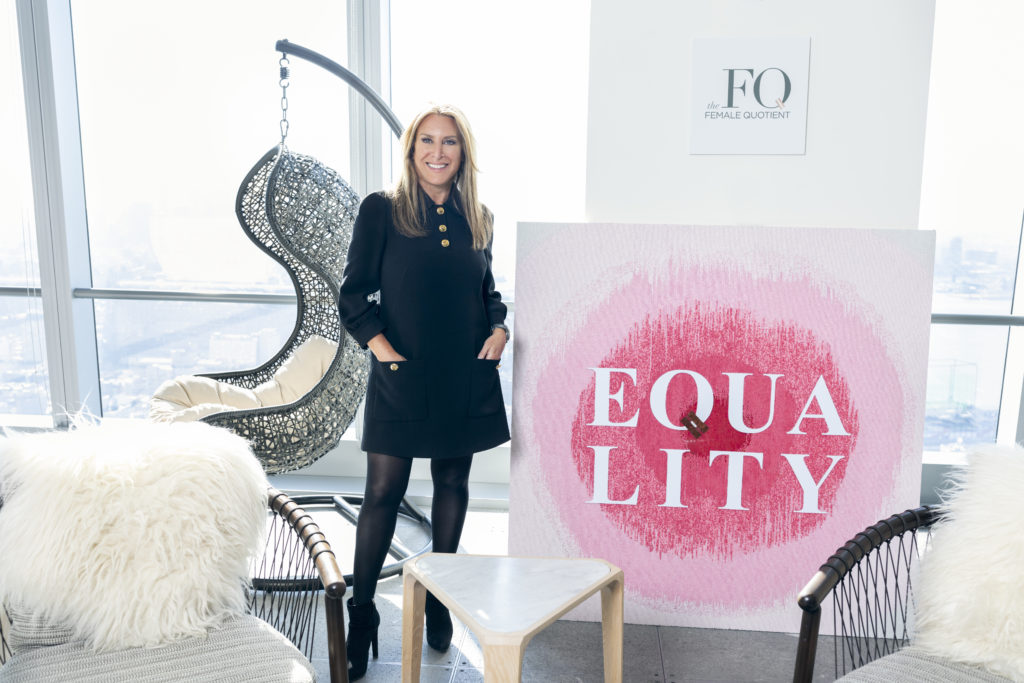 Marketer extraordinaire Shelley Zalis’ Female Quotient is a consulting firm that works with Fortune 500 companies on what it calls “the practice of equality”—things like closing the wage gap between men and women and recruitment of female employees.

Zalis, a pioneer in online market research who sold her first company, OTX, to Ipsos, is best known for launching a network gathering space, the FQ Lounge. These pop-up spaces serve as salons for women attending such events as the World Economic Forum in Davos, Switzerland, where this year her company is partnering with Politico’s Women Rule summit. The lounges are also found on college campuses and at corporate events such as the International Consumer Electronics Show in Las Vegas, where the idea first took root.

Related The Education of Shelley Zalis

Zalis is also the cofounder of #SeeHer, a movement led by the Association of National Advertisers to increase the accurate portrayal of women and girls in advertising and media. She is on the boards of directors of Makers, ColorComm and Dress for Success.

Previous Page123456Next PagePage 6 of 6
Worth Knowing Women & Worth