How Microsoft is Tackling Homelessness in SeattleBy Sarah Max

Seattle’s economy has boomed thanks to corporate giants such as Amazon, Boeing and Microsoft. At the same time, housing prices have soared, and the homeless population has exploded. Now a revolutionary solution may be coming from the unlikeliest of sources: Microsoft.

Walk around Seattle on a clear day—there are more of them here than most people realize—and it is a wonderland. The Cascade Mountains are to the east with the 14,400-foot snowcapped Mount Rainier presiding, and the Olympic Mountains rise in the west, seemingly springing up out of the Pacific Ocean. The city is skirted by 200 miles of shoreline, with Puget Sound on one side and Lake Washington on the other.

There are many dimensions to this lush and undulating city of 725,000 people. It’s one of the most educated in the country—63 percent of residents age 25 and older had a four-year college degree as of 2017, compared to a national average of only around 33 percent. It is an enclave for artists, artisans, activists and innovators. Boeing, Microsoft and Starbucks paved the way for the city’s initial ascent as a global business hub. And over the last decade, as Amazon has thrived, Seattle has made its mark as a technology hub.

But some of Seattle’s best features are also the source of its growing pains. Rapid job growth has made it one of the fastest-growing American cities over the past decade, driving up housing prices and rents, and pushing people out to the far suburbs and, in extreme cases, onto the streets.

READ MORE: How to Serve on a Nonprofit Board

“When police officers, first responders and teachers have to move their families out of the cities they serve in, we have a problem,” says former Washington governor Christine Gregoire, who now runs Challenge Seattle, an alliance of 17 CEOs from the region’s largest employers that focuses on tackling civic issues. When Challenge Seattle started in 2015, one of its primary focuses was bringing more jobs to the region. Last summer, the group turned its attention to housing. Nobody “anticipated the day when we would have more jobs than places to live,” Gregoire says, “but that’s kind of the point we find ourselves at now.”

Most of the homeless people have been here for less than a year.

Yet Seattle has not brushed aside issues of homelessness and affordability. On January 1, the minimum wage in the city for companies with more than 500 employees globally rose to $16 per hour (smaller companies are required to pay slightly less—$15 per hour). And in January, Microsoft pledged $500 million to provide early-stage, low-interest loans to for-profit and nonprofit developers and government entities. The goal: to ignite broader efforts to mitigate the affordable housing crisis throughout the Seattle area. It is the most significant financial commitment to the community in Microsoft’s 44-year history and possibly the largest such commitment ever made by a company.

“I don’t know of any other program of this magnitude that addresses the need for housing and the problem of homelessness,” says Daniel Flaming, president of Economic Roundtable, a Los Angeles-based nonprofit urban research organization.

With Microsoft’s money as a catalyst, Seattle could lead the way on affordable housing, a huge challenge for cities nationwide. “With these and similar investments, it’s possible to lend money, accelerate progress, be repaid and then lend this money again,” Microsoft president Brad Smith and chief financial officer Amy Hood wrote in a company blog post. “While this is just one of the many ways that we’ll seek to put money to good use, it illustrates [that] our financial commitment can have a multiplier effect.”

When Gregoire first moved to Seattle in the 1960s to attend the University of Washington, most people around the country knew little about the city outside of its iconic Space Needle. “If you used the word Washington, it meant D.C.,” she says. Now, tourists amble through the stalls at Pike Place Market, pedal share bikes through the Olympic Sculpture Park and file through the Frank Gehry-designed Museum of Pop Culture, or MoPOP, to pay homage to Seattle natives Jimi Hendrix, Nirvana and Pearl Jam.

The last decade has brought particularly dramatic changes, and not just in and around the South Lake Union district where Amazon occupies roughly 12 million square feet of real estate. In Fremont, a neighborhood whose motto is De Libertas Quirkas (or Freedom to be Quirky, in sort-of Latin), one of Google’s Seattle campuses is less than 300 feet from the famous troll sculpture under the Aurora Bridge. Capitol Hill, a bastion of grunge music and gay culture, is home to micro-apartments and cycling studios.

Yet despite, or perhaps because of, all the amenities, Seattle’s homeless population has swelled to one of the largest in the country, third after Los Angeles and New York, cities many times its size. Between early 2017 and early 2018, homelessness in Seattle increased 4 percent versus a 2.8 percent increase in New York and a 4 percent decline in Los Angeles.

Even among the most liberal-leaning Seattleites, homelessness is a source of conflict. Many people recognize that at least some of the homeless are coming to the city because it has a tolerant population and relatively mild weather. Yet, services have not kept up. The city is spending $90 million per year addressing the problem, but roughly half the 12,000 homeless people in Seattle are unsheltered. This has given rise to tent cities and homeless camps in green spaces and beneath freeway overpasses. 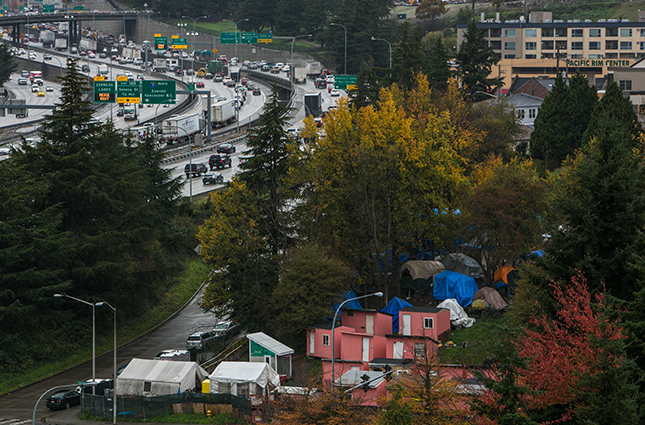 While homelessness is due to many factors—mental health issues and addiction being top causes—a dearth of affordable housing does not help; it creates a cascade effect whereby middle-income households displace lower-income households. Since 2011, jobs in the region have grown 21 percent, according to Challenge Seattle, while growth in housing construction has lagged at 13 percent. Over that time, median home prices in Seattle have more than doubled to over $680,000, according to Zillow (which, coincidentally, is also based in the city), while median rent tipped past $2,200 in February. “People who are at the lowest income really are within dollars of being evicted or put on the street,” says Gregoire.

READ MORE: Does the Yield Curve Inversion Indicate a Recession?

While there are federal and state programs aimed at low-income housing, including a Washington State law that authorizes property tax exemptions on new multifamily buildings that incorporate low-income options, middle-income housing has been squeezed. Home prices in the Seattle area are nearly seven times the median household income. In other words, a nurse earning $80,000 could not afford the median home price in the area and was priced out in 2014, says Gregoire.

Microsoft’s initiative is notable not just because of its sheer dollar amount but also because $225 million is designated for below-market-rate loans to preserve and build middle-income housing, which is defined as households earning between 60 percent and 120 percent of the region’s median household income, or about $54,000 to $108,000. Another $250 million is aimed at low-income housing, defined as households earning less than 60 percent of median household income, or $53,800. Microsoft has also included $25 million in grants for programs focused on solving homelessness.

The program’s success is predicated on public entities providing land grants, permitting and zoning. Clearing the way for increased housing density will be key. Roughly 75 percent of all residential land available is zoned as single-family in Seattle, versus less than 40 percent in Chicago, Boston and Brooklyn. In December, Minneapolis eliminated all single-family home zoning.

READ MORE: What Wall Street Gets Wrong About Giving

Transportation is also part of the equation. “It’s one of the most difficult cities in the world, I think, in terms of how the geography and topography impact the ability to provide transit,” says Ethan Melone, a transportation consultant who moved to Seattle in 1991. “If you have to go over a body of water or up a steep hill or underneath things in a tunnel, those things are very, very expensive. The cost to invest in transit is much higher than for a city that is flat.”

The city has been making progress. In 2016, it opened two new stations for light rail, which now connects the Seattle-Tacoma airport south of the city to the University of Washington, 18 miles north. That year, voters approved a $54 billion bond measure to fund 62 miles of public transit linking Tacoma to the south with the northern suburb of Everett, and connecting the eastern cities of Redmond, Kirkland, Bellevue and parts of Issaquah.

I’m fired up because rather than giving people a bus ticket and getting them out of here, Seattle is trying to do something.

Driving into the city for work, J. Coert Voorhees, a lifelong Seattle resident and developer, describes what he sees at the western terminus of I-90: tents, shopping carts and garbage everywhere. “Most of the homeless people have been here for less than a year,” says Voorhees, who is a partner with JCMV, a firm focused on sustainable building projects. When asked what excites him most about Seattle, though, it isn’t the trains, the job growth or the real estate. “I’m fired up because rather than giving people a bus ticket and getting them out of here, Seattle is trying to do something.”