Bay Area tech entrepreneurs have changed how we communicate and do business. Now the community is trying to disrupt philanthropy by reinventing capitalism.

Leaving traffic-choked San Francisco and heading south on the Pacific Coast Highway feels a bit like entering paradise—tiny hamlets, the wave-buffeted coastline, rolling green hills and fields. South of Half Moon Bay, there’s a highway turnoff to a speck of a town called Pescadero. After a short drive inland, cell service disappears. Soon enough, I come to a lowkey ranch gate with an electronic keypad—the TomKat Ranch, owned by Bay Area power couple Tom Steyer and Kat Taylor. On this particular March morning, a herd of deer leaped and bounded across the rutted dirt track.

I’ve come to TomKat to learn about their particular style of philanthropy. Steyer made his name as the founder of Farallon Capital, a San Francisco-based hedge fund whose investments in everything from a troubled Indonesian bank to Australian coal made him a billionaire. Steyer left the firm in 2012, refocused his investments primarily on alternative energy and restyled himself as a Democratic counterweight to the ultraconservative Koch brothers. With the election of Donald Trump, Steyer took a bigger role on the national stage by backing a movement to impeach the president—you probably saw him in ubiquitous ads on cable news calling for Trump’s ouster.

Taylor, the CEO of Oakland, Calif.-based Beneficial State Bank, is equally altruistic but lower profile. “We’ve had a lot of advantage in our life,” she says, perched on her living room couch while two chow chows and a pug keep a watchful eye. “With this kind of privilege comes huge responsibility to be part of making this country the best place to live and work for all. And it’s not, right now, at all.”

TomKat Ranch, a 501(c)(3) nonprofit, and Beneficial State Bank seek to wed commerce and philanthropy. The bank, the result of a merger between OneCalifornia Bank, which Taylor and Steyer founded, and ShoreBank Pacific, operates in California, Oregon and Washington. It functions like an ordinary bank except that it is required to reinvest all of its profits in social and environmental projects in the communities it serves. TomKat Ranch conducts long-term soil-science studies and conservation work in order to understand how to raise healthy cattle sustainably. The ranch sells the beef it produces under the label LeftCoast Grassfed.

Taylor and Steyer evolved their approach of weaving together social, environmental and commercial goals over the years. “Tom was running Farallon—I was raising a family, and I sat on a lot of nonprofit boards—and we were philanthropists in the common sense,” Taylor says. “We gave money to institutions that we supported or institutions that our friends and family asked us to support.”

Related What Wall Street Gets Wrong About Giving

That began to change in 2004 when George W. Bush beat John Kerry, whom Steyer and Taylor supported, to win the presidency. Taylor and Steyer began making “significant investments” in the ranch and bank “where we could take a systems approach to food and finance.” At the ranch, this means a model dubbed total impact measurement and management, which calculates the monetized values of six qualities: economic sustainability, animal welfare, human health, biodiversity, water quality and greenhouse gas sequestration.

That fusion of a business mentality with social and environmental goals presaged a powerful trend in the Bay Area tech community toward what’s become known as venture philanthropy. As tech fortunes have ballooned, the model, which is also characterized by donor involvement, has become increasingly influential.

“Twenty years ago the concept of venture philanthropy got its start in Silicon Valley because tech entrepreneurs began thinking about whether their innovative approaches with technology could help them address environmental and social issues,” says Fran Seegull, the executive director of the U.S. Impact Investing Alliance at the Ford Foundation.

It’s certainly true that many wealthy people have started socially oriented businesses alongside traditional philanthropic giving and political spending. But other ultrarich givers have further pushed the definition of philanthropy. One of them is eBay founder Pierre Omidyar, who became a multibillionaire overnight following that company’s 1998 IPO. Within a few years, Omidyar decided that he wanted to use that wealth in a nontraditional way. In 2004 he and his wife, Pam, incorporated the Omidyar Network, a grant-making organization in the traditional foundation mold as well as a venture and impact-investing vehicle. 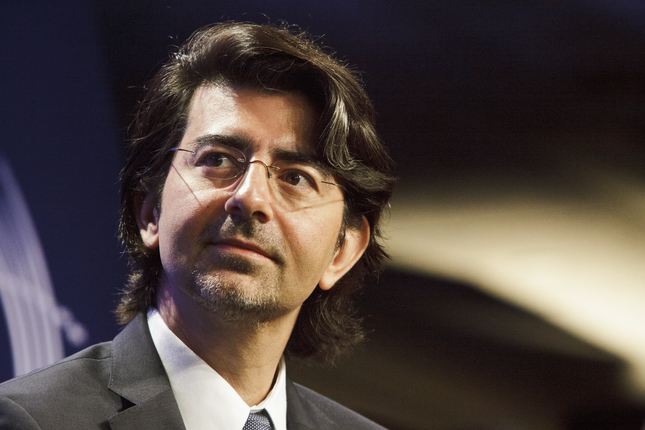 “When Pam and Pierre first found themselves with an incredible amount of wealth and a pressing need to put it to use, they started out creating a traditional foundation, the Omidyar Family Foundation,” says Robynn Steffen, director of impact investing at Omidyar Network. “The frustration with that model led them to create a philanthropic investment firm.”

The Omidyar Network is actually two entities, an LLC and a foundation, which are housed under the same roof. The structure allows the Omidyars to support causes through both straight-up grants and profit-making investments. Employees “start with the question of, What is the problem that we’re trying to solve and what is the most appropriate financial tool and capital to solve that problem?” Steffen says.

Today, much of this sounds like standard operating procedure. But when the Omidyar Network was founded, “the term impact investing had not yet been coined,” Steffen says, and Omidyar’s willingness to make philanthropy-minded investments in potentially profitable enterprises was radical.

There was real recognition by Pierre, having just been through the rocket ship of eBay, of the challenges of scale when making a positive mark on the world.

Omidyar’s choice to engage in venture investing as a means of creating positive impact stemmed from lessons he learned in Silicon Valley. “There was real recognition by Pierre, having just been through the rocket ship of eBay, of the challenges of scale when making a positive mark on the world,” Steffen says. The entrepreneur understood “how quickly a startup can grow from being an innovator in a garage to reaching millions.” Nonprofits, by contrast, “have a much, much more challenging time attracting revenue to scale at speed and [having] that same reach.”

The foundation eventually grew to $200 million after donations from other philanthropists, but the five-year initiative was widely viewed as an embarrassing failure, criticized for ignoring input from the community. Stung by bad press and reportedly regretful that he hadn’t been more engaged with the project, Zuckerberg and his wife, Priscilla Chan, looked for a different approach.

In 2015, the two launched the Chan Zuckerberg Initiative—funded by “up to” $3 billion in Facebook stock—as a limited liability company. According to CZI, “This structure enables CZI to make investments in social impact-minded ventures, as well as to build technology tools and products that we can scale and give away for free, and to engage in advocacy to help create and sustain positive change.”

The LLC model may offer more flexibility than nonprofit status, but from an ethical perspective, it has some issues. LLCs lack the transparency requirements—the disclosure of executive pay, for example—that nonprofits have. “LLCs also allow lobbying, which is prohibited in a foundation environment,” says the Ford Foundation’s Seegull. And they allow for political donations. Both of these latter qualities may be part of their appeal for tech billionaires. And the LLC structure essentially requires the public to take it on faith that the money is being spent on a good cause. “Mr. Zuckerberg was depicted in breathless, glowing terms for having, in essence, moved money from one pocket to another,” ProPublica reporter Jesse Eisinger wrote in the New York Times’ DealBook. Zuckerberg, Eisinger argued, was generating a priceless amount of good publicity for a contribution that was really more of an investment.

In June 2016, the Chan Zuckerberg Initiative made its first investment, putting $24 million in Andela, a Nigerian startup that trains software developers for work in Africa. The company addressed a genuine need, and CZI’s money helped it grow. (Omidyar Network and Salesforce Ventures are more recent investors). But Andela developers also happened to be developing products for tech companies. Nigeria, and Africa generally, are growth markets for Facebook, and the company launched an incubator in Lagos in 2017. Simply put, the deeper the talent pool in Africa, the easier growth will be for tech giants like Facebook. Andela will help Africa—but it will also help Facebook, Google and Salesforce expand their reach on the continent.

By January of this year, Andela had raised $180 million in funding. There’s every sign that the CZI’s $24 million investment will prove highly profitable. This win-win situation also presents the perception of a potential conflict of interest: Was Andela the most urgent investment the Chan Zuckerberg Initiative could make? Or did the fact that it happened to help Facebook tip the scale?

The San Francisco skyline is dominated by the Salesforce Tower, by some measures the tallest building on the West Coast. At night, the building’s upper six floors, which boast 11,000 LED lights, illuminate the foggy San Francisco sky with “public art” including surfing scenes and dancing women. The tower’s top deck is an event space available to nonprofits free of charge.

Salesforce founder Marc Benioff is putting his imprint on San Francisco in ways that are less obvious but probably more important: He has made himself the city’s most prominent and vocal philanthropist from the tech community. One way he’s done that is by building purpose into the DNA of Salesforce’s culture. 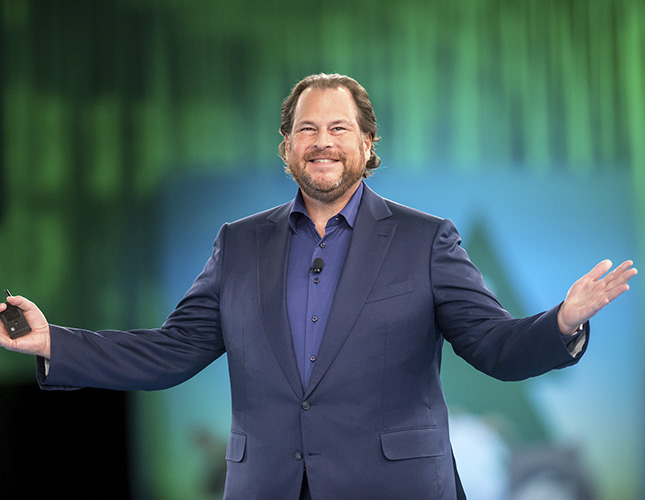 “It used to be that individuals made money and gave it privately,” says Suzanne DiBianca, executive vice president of corporate relations and chief philanthropy officer at Salesforce. “But [now] companies at very early stages…are making philanthropy a core part of their IPO process.”

We were trying to create a new kind of company.

At Salesforce, DiBianca, one of the company’s earliest employees, helped spearhead an initiative called Pledge 1%, also known as the 1-1-1 model. Some 8,500 companies around the world have joined, pledging to give away 1 percent of employee hours, 1 percent of the value of their products and services, and 1 percent of company equity to philanthropic causes. Salesforce had integrated the pledge from its beginning in 1999.

“We were trying to create a new kind of company,” DiBianca says. “We wanted to create a new technology model, which was software delivered over the internet.” The 1 percent-to-philanthropy pledge was designed to create “a company where the community benefits right alongside as it grows.”

Benioff has made his influence felt in other ways. He and his wife, Lynne, have made enormous personal contributions, including $250 million to fund children’s hospitals in San Francisco and Oakland. They’ve also given to San Francisco public schools and to help fight homelessness in that city. And Benioff has become a high-profile spokesperson on social issues including LBGTQ rights, women’s rights and pay equity. Finally, the Benioffs have signed the Giving Pledge, a commitment to give the majority of one’s wealth to philanthropy. In the process, Benioff has made himself a role model for a culture of young techies who can seem more concerned with getting rich than with improving the world.

The challenges are big, but trying to solve giant problems is kind of the Bay Area’s thing. “If we’re not wrestling with the severe inequity in our economy, then we’re not getting anything done,” says Kat Taylor. “One in three Americans now works full time and meets the federal definition of poverty. That’s a broken society. So if we’re moving the deck chairs around on the Titanic, I’m not interested.”