Funded by investment giant Fortress, Brightline—soon to be rebranded Virgin Trains USA—is offering a new means of transportation in one of the most congested regions of the U.S. Is America finally getting the train it needs?

This is Why Washington, D.C. Won the Amazon HQ2 Competition

To city dwellers used to the chaos and grime of New York’s Penn Station or Amtrak’s functional-but-modest stations across the country, stepping into Virgin MiamiCentral, the hub of south Florida’s new Brightline train, feels like entering the future. The Skidmore, Owings & Merrill-designed station is clean, easy to navigate and full of the kinds of amenities that matter to today’s traveler: fast WiFi, ample seating areas equipped with charging ports and a 40,000-square-foot food hall, Central Fare, to pick up a coffee or snack before your train departs.

“In the past decade, hospitality and retail have taken commodities and made them more experiential,” says Patrick Goddard, a former hotel industry exec who’s been president of Brightline since 2017. “You’ve got all these lifestyle and boutique hotels, but no one’s really taken the commodity of transportation and made it an experience.”

So that’s what Brightline is doing. An already $2 billion project nearly a decade in the making, Brightline is Fortress Investment Group cofounder Wes Edens’ bet that private passenger rail is the future of travel in the U.S., and that elevating the experience will create loyal users across the country. After a ride on the train, it starts to look like a smart bet. “Moving people in this way is much safer, much more comfortable and much more environmentally friendly,” Edens says. “It checks all the boxes.”

Moving people in this way is much safer, much more comfortable and much more environmentally friendly.

Bike racks on the Brightline. Photo courtesy of Brightline

Edens and Fortress officially announced the Brightline project in 2012, but the history of train travel in Florida spans more than a century. In the late 1800s, Henry Flagler, an industrialist who’s considered the father of modern Florida, brought the railroad to what was a largely undeveloped state. Flagler’s Florida East Coast Industries (FECI) built railways from Jacksonville all the way to the Keys, and Flagler’s development of iconic properties such as the Breakers in Palm Beach and Miami’s Royal Palm Hotel helped turn south Florida into the resort-heavy community it is today.

Following a bankruptcy in the 1930s and labor disputes in the ’60s, FECI eventually stopped offering passenger train service and continued operating as a freight railway. In 2007, Fortress Investment Group bought FECI for $3.5 billion. Fortress formed a subsidiary, All Aboard Florida, to build and grow what would become its Brightline project, the first privately funded passenger train service to launch in the United States in more than a century.

“The way Wes explained it to me in my interview was, ‘Most people see a railroad and they see one business—freight. But it’s really three businesses: freight, passenger rail and real estate,’” Goddard says. “He had that vision.”

Getting the train from vision to operation involved what Goddard calls a herculean effort, and the Miami to West Palm Beach line is only part of the project: This year Brightline will break ground on phase two, a 170-mile route that will eventually connect Miami to the Orlando airport and Walt Disney World, with expansion beyond Orlando also planned. Slated to open in 2022, the train will connect Orlando’s 116 million annual tourists to the south Florida market and Miami’s cruise terminal, the busiest in the nation. But a big part of Edens’ bet is also that south Florida residents who travel to Orlando regularly (and vice versa) will see the value in paying for a train that will free them up to work or relax instead of sitting in south Florida’s horrific traffic—while also decreasing the environmental impact of their journey.

In downtown Miami, Fort Lauderdale and West Palm Beach, Brightline is bringing new energy to what were relatively static neighborhoods. “In addition to the train stations, we’ve invested around $1 billion in real estate around them,” Goddard says. “There’s so much economic impact that this system has already made and will continue to make for decades.”

Blocks from Virgin MiamiCentral, a massive 27-acre, 15 million-square-foot office, retail, residential and hotel development project called Miami Worldcenter is just one example of a project that’s taken off in part because of Brightline’s investment. “We’ve designed our plan with Brightline, so our 27 acres is integrated with their 11 acres,” says Nitin Motwani, managing principal of Miami Worldcenter. “It’s a very pedestrian-friendly experience to walk from the station to the American Airlines Arena, the [Adrienne Arsht] Center for the Performing Arts, the Pérez Art Museum Miami, Frost Museum of Science or just the parks in general.” 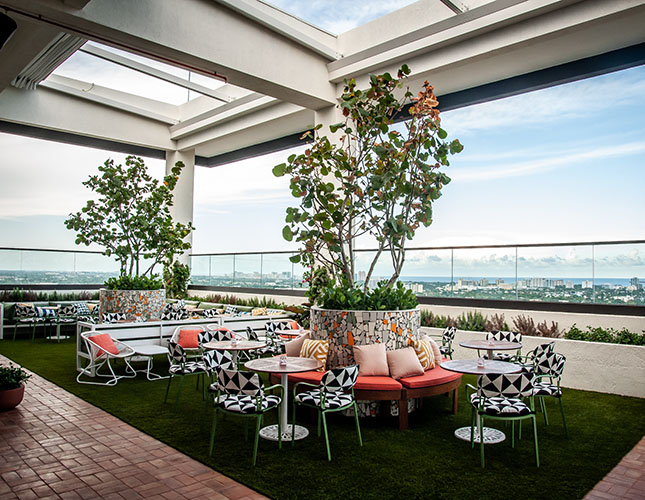 Further north, Brightline is helping to spark growth in downtown West Palm Beach, separate from the billionaires’ playground that is Palm Beach. “There is this confluence of factors that are appealing to larger numbers of people in various sectors of the population and the economy,” says Raphael Clemente, executive director of the West Palm Beach Downtown Development Authority. “Brightline is one of those.”

Companies that previously wouldn’t consider the south Florida region for their headquarters are taking notice. Miami was on the short list of finalists in the Amazon HQ2 search, and executives in each of the cities credit that to working together to pitch the region, not just Miami. “It was a situation where not one county on its own could answer the Amazon bid without the two other counties,” says Alyce Robertson, executive director of the Miami Downtown Development Authority. “It’s availability of workforce, availability of connectivity. We didn’t end up getting the bid, but it made a lot of people look at Miami in a different way, and it made us see ourselves as a region and not be so parochial about how we look at economic development.”

“It’s about workforce,” says Bob Swindell, CEO of the Greater Fort Lauderdale Alliance. “The broader [companies] can cast their net, the more successful they’re going to be at getting the talent they need. When you have a rail that connects three urban centers and 6 million people, it really does change things. It provides residents with more job opportunities and companies with more candidates to choose from.”

In November, Brightline announced that, in exchange for a small equity stake, Richard Branson’s Virgin Group would acquire naming rights to the train service. In April, Brightline rebranded its station as Virgin MiamiCentral. Later this year, it will rebrand the train as Virgin Trains USA. “You have to spend a lot of money to create awareness for a new brand,” Brightline’s Goddard says. “Virgin already has 96 percent brand awareness in the United States. This gives us immediate credibility as a national operator.”

That’s something Brightline will need sooner rather than later: In September 2018 it announced its plan to acquire XpressWest, a rail development project between Las Vegas and Los Angeles. Brightline expects the project to be financed, with construction permits in place, by the end of this year.

“The tagline I came up with was ‘looking for places too-far-to-drive, too-short-to-fly,’” Edens says. “That [strategy] has been wildly successful in Europe—London to Paris, Madrid to Seville. Orlando to Miami’s got those characteristics, Charlotte to Atlanta, Los Angeles to Las Vegas and others. It’s entirely possible that 20 years from now, dozens of U.S. city pairs will be connected in this way.”

Brightline expects to go public eventually, though an IPO planned for February was cancelled. “Our conclusion was that it was a little too early,” Edens says. “We’re capitalizing privately, and [it will eventually] be a terrific public company. It’s exactly the kind of thing that can and should be publicly capitalized.”

Now that investors and stakeholders can visit and see how the operation works in Miami, Brightline’s Goddard says national expansion should pick up pace. “When you go and sit with the governor of Georgia or North Carolina and you say, ‘I’m going to invest $4 billion of private money in your state to create a mobility solution,’ they’re going to say, ‘How can I move obstacles out of your way to do that?’”