Houston is Becoming the Cultural Capital of the SouthBy Sandra Ramani

With burgeoning arts, cultural, culinary and design scenes, Houston just might be entering its Golden Era.

On any given day in Houston, you’ll find Jonathan Delgado peddling happiness from his two Popston carts on the campus of the Museum of Fine Arts. As visitors stroll through the Isamu Noguchi-designed Cullen Sculpture Garden, enjoy free concerts in the plaza or snap selfies from the rooftop garden of the Glassell School of Art—all areas that were recently redone as part of the museum’s historic $450 million expansion—Delgado helps brighten their day with colorful, all-natural popsicles that draw from his childhood memories of making fresh juices with his grandmother in El Salvador. In honor of his location at the museum (an opportunity he credits with “changing [his] life”), Delgado’s seasonal treats pay tribute to current exhibits and artwork: a chocolate-dipped-banana pudding and Nilla wafer concoction inspired by Anish Kapoor’s Cloud Column sculpture, for example, or a passion fruit-guava-mango-kiwi treat in honor of this year’s Van Gogh retrospective.

This intersection of arts, culture, cuisine and design is at the heart of what’s driving Houston these days and what’s elevating its profile on the international stage. Now the fourth-largest city in the U.S. and on track to become the third largest by the late 2020s with a diverse population of more than 2.3 million that might surprise outsiders—the south Texas metropolis feels like it’s coming into its own, finding its voice and expanding beyond its oil and gas roots. With growth in fields such as medical research, healthcare and tech, an influx of international travelers and new residents, and a dynamic culinary scene—just ask the James Beard Foundation, which announced its finalists from Houston this year—H-Town is enjoying what many locals are touting as its Golden Era.

People are unwilling to settle for the way they used to live.

“In the 1970s and ’80s, Houston was a place where people came to make money and leave—but some of us didn’t get the memo,” says John Breeding, president of the Uptown Houston District and administrator of the Uptown Development Authority. The two government-adjacent entities’ $500 million-plus in projects include everything from infrastructure improvements and adding futuristic transit hubs in the Uptown neighborhood to partnering with the Memorial Park Conservancy to redesign one of the country’s largest urban parks. The latter has enlisted such top talent as landscape designer Nelson Byrd Woltz, who also worked on New York’s Hudson Yards. (Once renovated, the park will be home to one of the only city-center PGA-level golf courses in the country, allowing the Houston Open to come back from the suburbs starting in October 2020.) “People started working on things they were passionate about in their own areas, be it art and cuisine or neighborhood planning,” says Breeding, “and now they’re bumping into each other. In the last five or so years, we’re suddenly being dubbed an overnight success. But it’s really due to 40 years of dedicated work.”

Breeding says that the key difference in Houston today is an improved quality of life. “People are unwilling to settle for the way they used to live. New arrivals, long-timers—we’re all mining ground that may have been overlooked.”

Some of that rediscovery and reimagining was born of necessity. After Hurricane Harvey hit in August 2017, ultimately causing around $125 billion in damage in and around Houston and south Texas, the city banded together to address immediate needs and then rebuild based on a reevaluation of how things might operate going forward, from the city’s approach to sustainability and bayou management to downtown revitalization and increased high-rise living options.

We had to show that we could still have beauty in our lives, even if our homes were flooded.

This resilient spirit was particularly evident in the downtown arts district, where institutions such as the Houston Ballet, the Houston Grand Opera and the Wortham Theater Center were hard hit due to their location on the banks of the bayou. “We had about a million dollars in direct damage, and many millions in losses for the season,” says Jim Nelson, executive director of the Houston Ballet. “It was the biggest crisis the company has faced. But we needed to perform to provide a sense of normalcy for our patrons, our company and our students, many of whom weren’t even back in their houses. We had to show that we could still have beauty in our lives, even if our homes were flooded.” 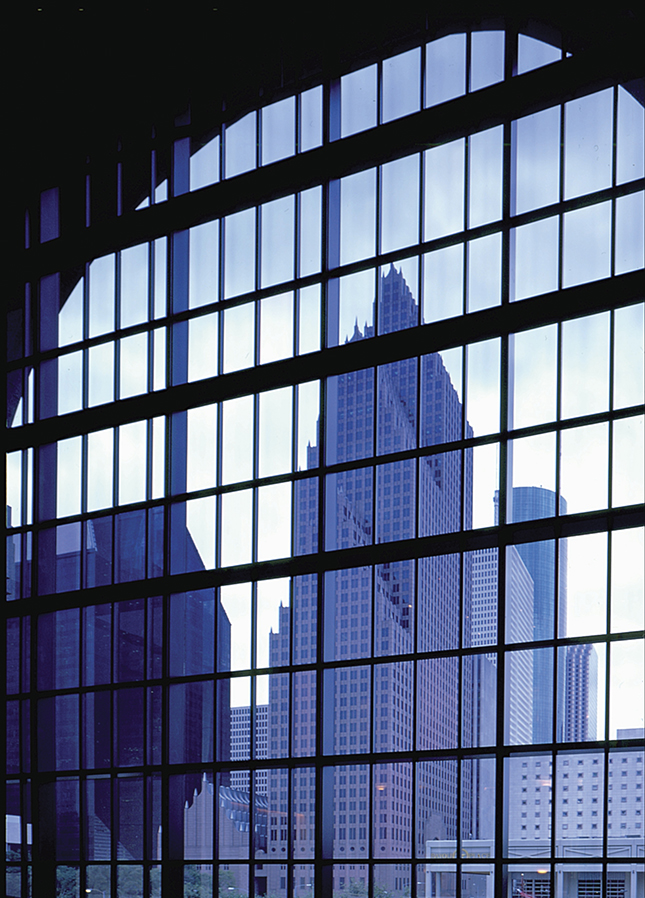 The view from inside Wortham Theater

By the end of that September, the ballet, along with other performance institutions, opened its season in borrowed locations, tailoring shows to fit the new spaces; by October, the opera had commandeered an exhibit space in the convention center and dubbed it the Resilience Theater. “It was a true lemons-into-lemonade scenario, but everyone—all the way up to the mayor, who was very supportive of the arts—spun the challenges into something creative, and people really responded,” Nelson says. “We called that entire season our Hometown Tour.”

As Nelson notes, part of coming back strong was also ensuring that the city’s cultural institutions did “not lose their world-class status and that we would get back on our feet at the same level.” Because “world-class” is exactly where things have been heading in the last few years, and while Harvey may have delayed that progression, it didn’t derail it.

It’s an exciting time to be in Houston, as it makes an extraordinary transition from a regional city to an international hub.

At the Museum of Fine Arts, the 14-acre expansion—the largest cultural redevelopment project currently underway in the U.S.—was delayed by the hurricane by several months and several million dollars. But it is now on track to culminate with this fall’s opening of a state-of-the-art, 39,000-square-foot conservation center, followed by the 2020 opening of a 164,000-square-foot hub for 20th and 21st century art. “It’s all with the goal of elevating the user experience and providing more opportunities for the public to interact with the arts,” says Gary Tinterow, director of the museum. Originally from Houston, Tinterow had a 30-year curatorial career at New York’s Metropolitan Museum of Art before returning south. “It’s an exciting time to be in Houston, as it makes an extraordinary transition from a regional city to an international hub,” he says. “We have a more diverse population now, and most business and city leaders recognize that the quality of life is one of the key factors in Houston continuing to grow and prosper. About 60 percent of visitors come here for cultural pursuits.”

Related Where to Stay, Play and Invest in San Antonio

When they get here, many of those visitors are also heading for the Menil Collection, which was founded in 1987 with the private collection and endowment of trailblazing art enthusiasts and Parisian transplants John and Dominique de Menil. Building on their personal relationships with many mid-century artists, the Menils amassed a trove that’s heavy on names like Rothko, Warhol, Ernst and Magritte (you’ll find the largest number of works by the latter outside of Europe here) but also features important Cézanne watercolors, a noteworthy collection of Byzantine art and pieces by contemporary Texas artists.

While the Menil campus stretches across 30 acres, the artwork is centered in the Renzo Piano-designed main museum (which was renovated and reopened in 2018 with the aim of showcasing more of the permanent collection), the Cy Twombly Gallery (also by Piano) and the $40 million Menil Drawing Institute, opened in late 2018 as the country’s first freestanding facility for the exhibition, study and conservation of modern and contemporary drawings. To engage the community and diminish any feeling of exclusivity, there are no steps leading to any of the buildings and museum entrance and programming is always free.

This focus on inclusivity is also front-of-mind when locals talk about the dynamic culinary landscape, which is itself a product of Houston’s cultural diversity. Among this year’s James Beard Award semifinalist nominations were 11 nods to Houston-based chefs and businesses, a clear indication of the breadth and depth of its foodie scene. Alongside previous nominees and winners like Chris Shepherd (UB Preserv, Georgia James, One Fifth), Hugo Ortega (Hugo’s, Caracol, Xochi) and Trong Nguyen (Crawfish & Noodles) were disrupters like Jonny Rhodes (who earned a Rising Star Chef of the Year nomination for his genre-bending, neo-soul restaurant Indigo), Outstanding Bar Program nominee Anvil Bar & Refuge (home to creative cocktails and the friendliest bartenders around) and first-time Best Chef-Southwest nominee Kaiser Lashkari, whose casual Indian-Pakistani joint, Himalaya, packs in the locals, including many fellow chefs. 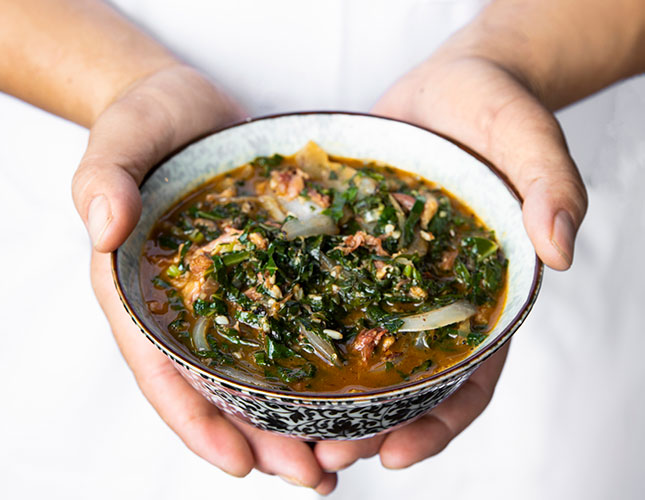 At the late-March announcement of the finalists, held over breakfast at Hugo’s, James Beard Foundation CEO Clare Reichenbach joined civic leaders in touting Houston’s transition “from Space City to Food City,” citing factors like ethnic diversity, friendly zoning laws and the local food community’s commitment to doing good as reasons for the culinary richness. And more evidence of this continues to emerge, with notable recent openings including Eunice, chef Drake Leonards’ modern twist on Cajun-Creole classics, and Bravery Chef Hall, one of the country’s first chef-partnered, incubator-style food hall/test kitchens, where diners can interact directly with chefs and mixologists preparing everything from fresh pasta and upscale Vietnamese food to bottled cocktails.

“Houston is the new Creole city of the South—a port town that’s a mix of all the people and products that come through here,” says Leonards. Uptown Houston’s Breeding adds that this diversity “is not threatening—instead, we thrive on it.” And the Ballet’s Nelson sums up the current H-Town energy like this: “It’s an amazing time to be a Houstonian because it doesn’t matter where you’re from. Once you’re here, you’re welcomed—and welcome to make a great life for yourself.”