The Charleston College Where You Can Major in MasonryBy Alison J. Stein

In one of the country’s most historic cities, a new college is working to preserve centuries-old crafts—and help rebuild America.

Sacramento is Entering a League of Its OwnThis is Why Washington, D.C. Won the Amazon HQ2 Competition

It’s spring break, that annual week of debauchery that looms large in the lives of many college students. But at the American College of the Building Arts in Charleston, S.C., students are reluctant to leave school and take time away from their studies at all, let alone leave town on a vacation.

Take Bryson Youngblood Keefer, 21, for example. On the second day of spring break, this college junior is wearing a leather apron. His face covered in soot, he’s shaping iron into a frame for a small mirror. It’s a self-initiated project to match one he completed during winter break, when he also skipped a trip home to his native Los Angeles. “While I’m at the forge at this school, I’m very focused on the task at hand,” he says, confessing that he sometimes sleeps in his car outside the school to maximize his work time.

This is what we live and breathe.

India Lee, 27, a blacksmithing junior who hails from Indianapolis, is spending her spring break at the forge working on a mix of schoolwork and a personal project. “I’m seeing how I can manipulate metal into different shapes, playing with its plasticity,” she says. When asked whether there’s somewhere else she’d like to be while school’s out, she looks slightly puzzled. “This is what we live and breathe,” she says.

None of this is a surprise to Wade Razzi, the school’s chief academic officer. “If we let them,” he says, “the students would be here 24 hours a day.”

The American College of the Building Arts is a new kind of school located in a repurposed trolley barn just outside Charleston’s historic downtown. It offers an education in skilled building trades, such as timber framing, architectural carpentry, masonry, blacksmithing and architectural stone carving, paired with traditional four-year college subjects such as literature, history and science. That way, graduates acquire both highly marketable specialized skills and a bachelor’s degree. The school is quite small—at the moment, 75 students are enrolled—and quite young: It awarded its first degrees in 2009, to just seven students.

But despite its tiny size and tender age, the college has already had an outsized influence in Charleston and beyond, with students and alumni working on high-profile historic preservation projects around the world and close to home, including the city’s perennially popular Drayton Hall, an immaculately preserved 18th-century plantation. And it just might be a model for helping to solve a serious national issue: the growing gap between the jobs that are available and the number of people who are trained to fill them.

Charleston is the ideal place for such a solution to emerge. To understand why, you have to go back to before the city’s current economic success. Today, Charleston sits comfortably at number 16 on the Milken Institute’s Best-Performing Cities Index, a gain of six spots since 2017, on the strength of its high-tech GDP growth, for which it placed sixth in the nation. Median family income is $76,236, up 27.6 percent since 2012, and population growth outpaces the national average.

This stands in stark contrast to the past 100-plus years, when Charleston was, to put it plainly, a mess. The Civil War and Reconstruction ended its initial run of economic prosperity, which had been fueled in no small part by enslaved people. A veritable parade of natural and human-made disasters followed, including strong earthquakes, devastating fires and, of course, hurricanes.

But this litany of misfortunes has also led to what would be Charleston’s modern asset: The buildings that survived all this war and natural disaster, some dating to the 1700s, weren’t altered very much. “There’s a great expression here: ‘Charleston was too poor to paint and too proud to whitewash,’” says Kristopher King, executive director of the Preservation Society of Charleston. “Because of what was basically a 100-year economic recession, we didn’t get many new buildings.”

Either as an adaptation to circumstances or just a matter of taste, a preservation ethos emerged. “This is a community that’s always appreciated its unique urban form and architecture,” he says, pointing out that his organization was the first such preservation society in the country, founded in 1920, and that Charleston was also home to the nation’s first historic district.

Today that well-preserved history is a huge draw for both new residents and visitors to Charleston—“history and historic sites” is the first item on the list of the city’s greatest assets, according to the Office of Tourism Analysis at the College of Charleston. And draw them it does: Some 6.9 million tourists visited the area in 2017, generating $7.4 billion in total economic impact, according to the most recent figures.

“You can walk down the same street in Charleston every day for a decade and find something you never found before—there are so many layers and details,” says King “Maintaining the authenticity of those details is critical for preservation and the economic benefits that come from it. Austin has the saying Keep Austin Weird. We have Keep Charleston Real.”

Yet even the most selfie stick-absorbed passenger on one of the many horse-drawn carriages clip-clopping through Charleston’s historic downtown will notice that every other block or so, there’s a scaffolding, a ladder and a person at work. These are the brick masons, decorative plasterers, timber framers, wrought iron workers—the skilled artisans who are helping to “keep Charleston real.”

And that’s a serious problem, says Winslow Hastie, president and CEO of Historic Charleston Foundation. “While it sounds sort of mundane to have, for example, a brick mason who knows what they’re doing, who understands how a historic building needs to breathe, what kind of mortar it needs, it’s super important, because then the work actually functions and it lasts,” he says. “These are very particular skill sets. While we’re very lucky to have a great group of craftspeople in Charleston today, they’re becoming more of a rarity— people are constantly retiring, dying or moving on.” 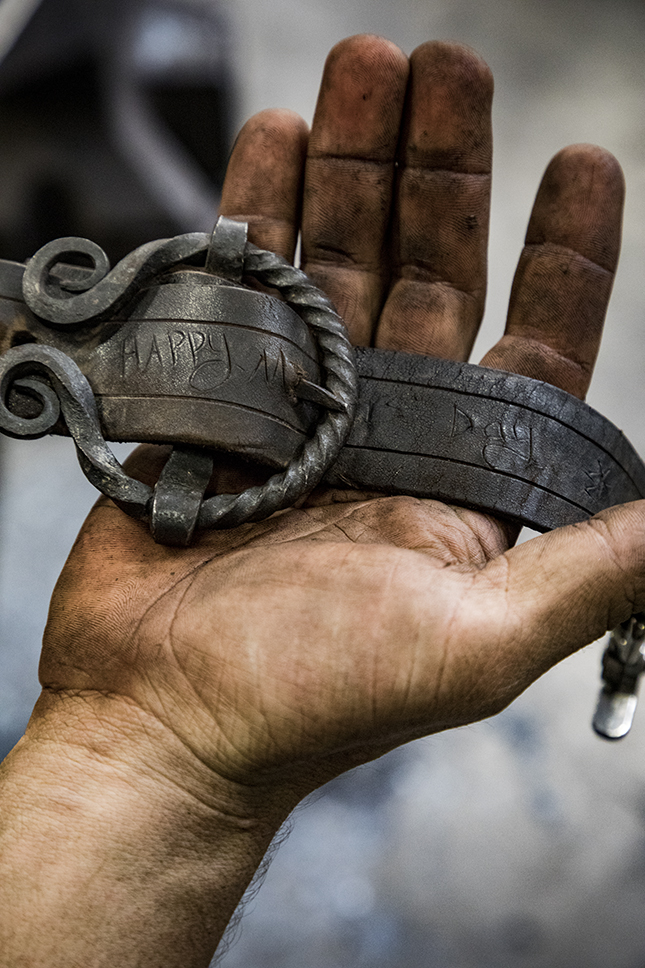 And there are fewer young people to fill this void. Despite an ever-growing demand for skilled building tradespeople nationwide—nearly 750,000 new jobs by 2026, according to government estimates—high schools have largely dropped “career and technical education,” which includes shop classes, apprenticeships and other opportunities to get early exposure to a trade. Between 1990 and 2009, the number of these credits earned in high school dropped by 14 percent, while the percentage of students who sought any postsecondary education in the construction trades also declined. This was in response to increasing requirements in core academic areas, funding declines and a growing perception that all students should have a four-year college degree, according to a Brookings Institution analysis.

Charleston felt the early effects of this growing crisis in the aftermath of Hurricane Hugo, which devastated the city in 1989. The demand for skilled craftspeople to repair damaged old buildings in the city was huge, and the paucity of skilled workers was painful: Hack contractors pawned off substandard work, and residents went as far as Europe to find people with the specialized skills that were required. It was clear something had to change, says King: “The American College of the Building Arts was in response to a concentrated need for skilled craftspeople, which was highlighted by Hurricane Hugo.”

In the president’s office of the American College of the Building Arts, retired Lieutenant General Colby Broadwater III sits at his desk. After a 34-year career in the military, Broadwater is now serving quite a different national need: “Enhancing and preserving the built environment— that’s who we are, that’s what we do,” he says. “We educate artisans.”

He explains that the college’s program is a modern adaptation of les compagnons du devoir, the French guild system for training craftspeople that dates back to the Middle Ages and is based on traveling apprenticeships. At the college, this translates to three required externships, whether at local building projects or at the U.S. Capitol dome, Mount Vernon, Fort Sumter or various cathedrals and castles in Europe. Its baccalaureate program requires all students to complete classes in architectural drawing and drafting, by hand on paper, in addition to computer-assisted drafting. Math classes focus on the geometry and calculations necessary in the building arts, materials science, history focuses on architecture. There are also requirements in basic business subjects like accounting.

You have no idea what you’re going to get on a commercial job.

From there students move on to coursework in their chosen specialty: architectural carpentry, architectural stone, forged architectural ironwork, masonry, plasterwork, timber framing, classical architecture. Many classes include hands-on experience at local work sites. For example, masonry students are now restoring the monuments at the Circular Congregational Church’s graveyard, one of the oldest cemeteries in the city. “Those monuments are a microcosm of a building—there’s a foundation, walls and a roof,” says Simeon Warren, chair of traditional masonry. Since the area is open to the public, students have coped with the unexpected, including Halloween vandalism. “You have no idea what you’re going to get on a commercial job,” Warren says. “That’s the point of that exercise.” 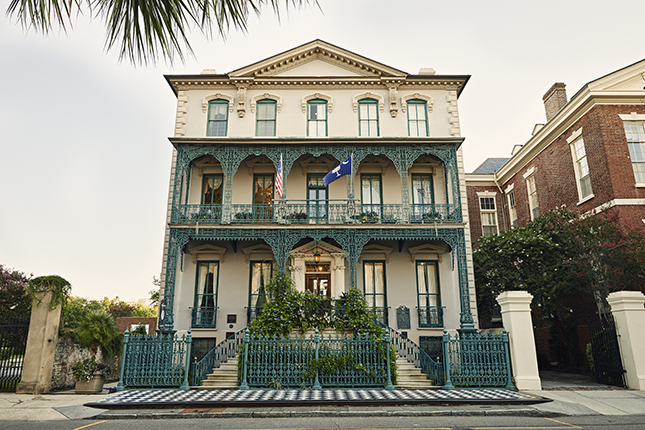 ACBA’s graduates say the school’s approach has helped them immeasurably in their careers. Guyton Ash, class of 2011, who majored in timber framing, now co-owns Artis Construction in town, which works on high-profile projects like the Faber House, an 1832 mansion adapted for commercial use. He says his education has helped him balance the competing issues of historic preservation and affordability when working with clients, as well as to develop innovative solutions to thorny construction problems. “I have a better understanding of how a structure works going back a thousand years and still working,” he says.

Another graduate, Tyler Bickerstaff, class of 2015, is now COO of Robert Thomas Iron Design, an ironwork company in Charleston. Bickerson says the school prepared him with the exact portfolio of skills he needed. In addition to forging award-winning wrought iron pieces, “I learned everything from doing detailed business plans, to working with new materials research, to managing meetings with the Board of Architectural Review.” But perhaps the greatest proof of the program’s success is this: The college has 100 percent job placement for its graduates, with most fielding multiple job offers in their chosen field.

Related Where to Stay, Play and Invest in Charleston

Of course, no matter how innovative its program, the American College of the Building Arts will never fill the yawning gap between the need and the availability of trained craftspeople, nor does it intend to. Expansion plans call for the school to eventually accommodate a maximum of 150 to 200 students, a minuscule fraction of the hundreds of thousands of new construction jobs the economy will create. But many of those new construction jobs will be more mundane in nature, points out Ashley Wilson, architect at the National Trust for Historic Preservation in Washington, D.C. “Probably a tiny percentage of these jobs will need these high-end detailed skills.”

And yet no matter how specialized, the urgent need to preserve the history of places like Charleston is always there. President Broadwater regularly fields phone calls from people interested in replicating the program in their communities. “We’ve had inquiries from the Northeast and mid-Atlantic, from Minnesota, from Cuba, from China,” he says.

There may eventually be branches of the college in other places, or at least partnerships. But for now, Broadwater says, the ACBA will stay focused on its local mandate: growing its enrollment and training the artisans who will help Charleston maintain its unique character for centuries to come.