One of the nation’s great cities has been challenged in recent years by everything from a tragic murder rate to police abuse to pension shortfalls. As Chicago’s first black female mayor takes office, could the Windy City finally solve its toughest problems?

Houston is Becoming the Cultural Capital of the South

On November 7, 2016, Chicago mayor Rahm Emanuel was standing next to a patch of dirt in the city’s glitzy River North neighborhood, a towering construction crane behind him. Emanuel was celebrating a new milestone for his administration: A record-setting 33 tower cranes dotted the skyline in a testament to the city’s economic prowess and global stature. The mayor was ringing in the good news at the construction site of One Bennett Park, an 836-foot tower that is architect ’s first building in Chicago. Completed in early 2019, One Bennett Park has already seen 10 condos sell for more than $4 million apiece.

But the news by a tragically familiar development: That same day in November, Chicago saw three people killed and 15 others wounded in shootings, including a 16-year-old boy gunned down in broad daylight next to a station for the city’s Green Line train.

Two and a half years later, Emanuel is wrapping up his second term, ending a tenure widely considered a boon to downtown but less helpful for many of the city’s struggling neighborhoods. Succeeding Emanuel is Lori Lightfoot, a former federal prosecutor and corporate lawyer who will become the first black female, and openly gay, in Chicago’s history.

Lightfoot is taking over at a critical time. Emanuel helped the city recover from the recession, took politically painful steps to help steady the city’s finances and boosted its global status. But he left the heavy lifting on some of Chicago’s other problems—violence and crime, police abuses and racial and financial segregation chief among them—to his successor. Despite Chicago’s ever-growing importance as a center of global business and finance, the issues have been a drag on Chicago’s reputation for years—and have exacted a terrible human toll.

I think the new mayor will make progress in these areas. There’s no choice; she has to.

Lightfoot appears poised to tackle these long-standing problems. “I think the new mayor will make progress in these areas,” Dick Simpson, former alderman and current political science professor at the University of Illinois at Chicago, says. “There’s no choice; she has to.”

Emanuel took over as mayor in 2011 in the most Chicago way possible. After 22 years in office, mayor Richard M. Daley announced he wouldn’t seek a seventh term. Daley’s unexpected decision left a power vacuum in a city for over 40 years. Emanuel quickly filled the vacuum, leaving his job as Barack Obama’s chief of staff to run and easily win as Chicago’s mayor. Emanuel’s replacement in the Obama administration was Mayor Daley’s brother, Bill. .

Eight years later, Chicago’s economy is resurgent under Emanuel. Mirroring nationwide trends, the unemployment rate is at a record low of 4.4 percent. There are now more jobs per capita than there have been in 50 years. The city set new records for construction cranes in both 2016 and 2017, filling out its already magnificent skyline with a new wave of modernist skyscrapers. Led by companies like McDonald’s and Motorola, Chicago has seen more corporations move their headquarters there than any other American city for six years.

Mayor Emanuel deserves a lot of credit for his efforts to stabilize the city’s financial situation.

with helping to stabilize the city’s pension crisis. Through politically difficult tax hikes and fee increases, Emanuel helped raise over $864 million in additional annual revenue for the city’s public pension funds, according to Chicago’s Civic Federation. He secured an extra $200 million a year from the state for the teachers’ pension system. Still, the pension funds carry about $28 billion in liabilities. “Mayor Emanuel deserves a lot of credit for his efforts to stabilize the city’s financial situation,” says Laurence , president of the Civic Federation, a nonprofit research group. “He invested a lot of his energy and time tackling the city pension crisis.”

Emanuel’s love of the arts and humanities—he danced ballet while in college at Sarah Lawrence—helped boost the city’s appeal. Following the creation of events such as the Chicago Architecture Biennial and Chicago Ideas Week, the city set records for tourism in 2017 and then again in 2018, when 58 million visitors came to Chicago. The bustling downtown and economy also raised the city’s global profile. Chicago now ranks eighth on A.T. Kearney’s Global Cities Index, which measures factors including “business activity, human capital, information exchange, political engagement and cultural experiences” that make cities successful.

But that success hasn’t extended to every corner of the city. In 2016, Chicago’s murder rate was at a 20-year high. Since then, gun violence has trended downward, but Chicago still routinely has more murders than New York and Los Angeles combined. “The city has prospered under Mayor Emanuel,” the Civic Federation’s says. “What has not is the economic development and retention in farther-out communities, particularly on the south and west sides.” 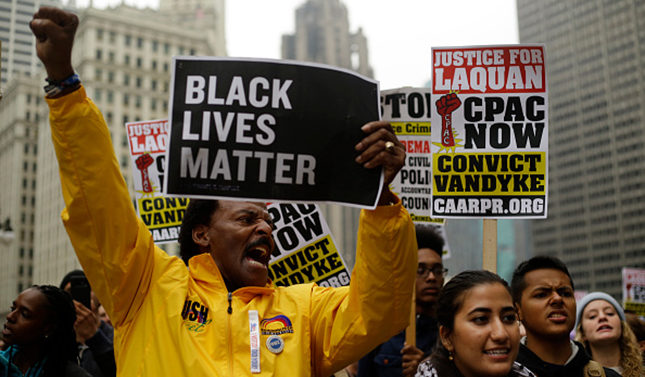 video of a police officer fatally shooting McDonald, a 17-year-old African American, in 2014 rocked the Emanuel administration and the police department. As Emanuel called for peace, protesters blanketed the city. The mayor sacked his police chief and publicly welcomed a U.S. Department of Justice investigation, but it wasn’t enough: Emanuel’s handling of the McDonald as the catalyst for his foregoing a third term. (Emanuel has not said why he didn’t seek reelection in 2019.)

The violence, police abuses and lack of economic investment have caused untold suffering in the city’s lower-income areas, where deep-seated pain and anger reverberate through communities, fueling future cycles of violence. Chicago is the only one of the country’s five largest cities to see a population decrease in 2017, the third year in a row of population losses, according to the New York Times. And in a striking trend for a city that once served as the destination for blacks leaving the legacy of Jim Crow in the South, the exodus from Chicago has by black residents, even as new white residents move in.

Bill Daley, who took Emanuel’s old job as Obama’s chief of staff, tried to succeed Emanuel again, this time as mayor. Upon entering the race in late 2018, Daley shot to the top of the polls. The business community fell in line, giving Daley by far the biggest campaign war chest in the 14-way race.

But Chicagoans didn’t want to maintain the status quo, and Daley won only 8 out of 50 wards in the primary. Instead, voters favored two progressive black women, with Cook County Board president Toni Preckwinkle making it to the runoff against Lightfoot. (Chicago municipal elections don’t use a party system, with all candidates facing off in a primary and the top two vote-getters advancing to a runoff if no primary candidate secures 50 percent of the vote.) It was Lightfoot’s first campaign for any elected office, and the relatively unknown and candidate shocked the political establishment by finishing first in the primary.

The Lightfoot framing won out.

: shaking down the owners of a Burger King, demanding they contribute to Preckwinkle’s campaign if they were to receive building permits. (The accused alderman, Ed Burke, won reelection in February despite facing federal charges in the bribery scheme.) Suddenly, Preckwinkle’s decades of experience and ties to the political establishment were a liability rather than an asset. Lightfoot seized on the unfolding scandal to establish herself as the candidate of change. “I’m not a part of the broken and corrupt political machine that has a stranglehold on every aspect of our civic life,” she said at a mayoral debate in March.

“The Lightfoot framing won out,” says Simpson. Voters handed Lightfoot a landslide victory: She won each of the city’s 50 wards. Now, residents and political observers are watching to see if her outsider status will really help in solving the city’s problems—or if she’ll be overwhelmed by Chicago’s powerful entrenched interests and Machiavellian political .

Her background should help. Drawing on her experience as both a former federal prosecutor and the head of the police board, Lightfoot ran as a tough-on-crime candidate who is also highly qualified to reform the police department. Lightfoot played a role in drafting the federal consent decree—approved by a federal judge in January—that seeks to reform the department. And her police board fired more problem officers on average than previous boards, according to the Chicago Tribune.

It’s a balancing act. Lightfoot’s status as a former prosecutor and her support from police officers and for initiatives like a new police training academy gives her credibility with cops—but it also has some progressives skeptical of her reform bona . 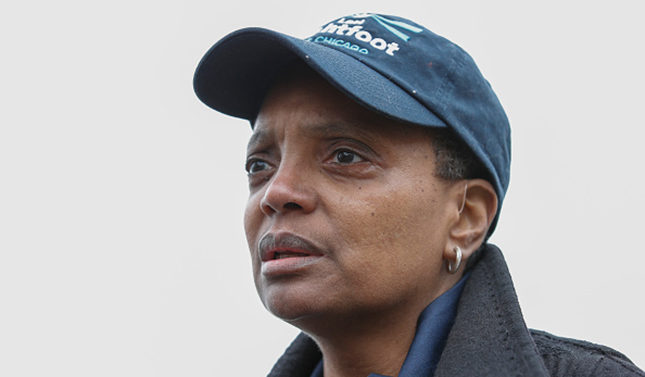 Chicago mayor Lori Lightfoot talking to the press ahead of being elected. Photo by Kamil /AFP/Getty Images

On the problem of gun violence, Lightfoot has called for a holistic approach that might also poverty and disinvestment. She supports violence prevention and social justice initiatives in public schools and has called for investments in organizations doing violence-intervention and prevention efforts.

Chicago’s financial problems will be one of her most pressing challenges. The city must earmark an additional $1.2 billion for its pension systems within the next four years, and no one seems to know exactly where that money will come from. Lightfoot has been vague about her plans for the city’s financial crisis, but she has come out new revenue streams from a city-owned casino, a tax on major law firms and a graduated property transfer tax.

The new mayor’s first chance to test her political capital came in late May, when the Emanuel administration attempted to ram through approval of two proposed mega-developments before his term ends. The massive projects, one along the south branch of the Chicago River and the other along the north branch near Lincoln Park, are Hudson Yards-lite, representing a combined $13 billion investment that could bring 28 million square feet of office, apartment, commercial and park space. (The developer behind New York’s Hudson Yards, the Related Companies, is also behind one of these developments.) The projects’ developers are seeking a combined $2.4 billion in public financing, a proposal that’s been highly controversial and was an issue in the mayoral campaign.

Lightfoot asked Emanuel and the city council to pump the brakes, saying that hastily approving the projects ran afoul of her electoral mandate. When Emanuel refused, Lightfoot salvaged what she could, going to the developers and successfully pressing them to increase their minority- and women-owned business contracts, an agreement she announced on April 9. With protesters blocking LaSalle Street outside city hall, the council approved the $2.4 billion subsidy on April 10. “Enjoy this moment in the sun,” Lightfoot told developers after the vote. “You get a deal like this again.”

Language like that will provoke some angst within the business community. ’s sign-off on the public funding, reluctant though it was, disappointed progressives tired of Emanuel’s aggressively pro-development days. For Mayor Lightfoot, it’s an inevitable straddle in a city no individual is powerful enough to boss around. But if she can pull it off, she just might stop the bleeding in Chicago.